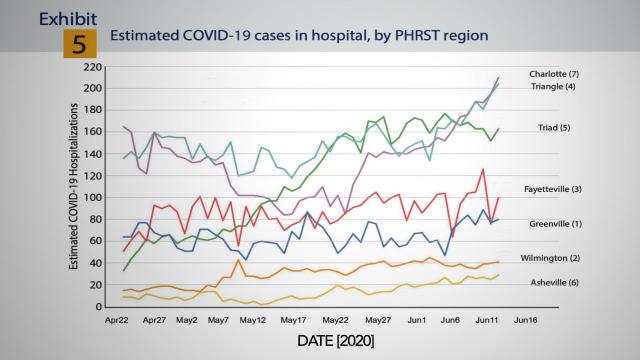 Raleigh, N.C. — A group of public health experts say that although North Carolina hospitals are likely a long way off from running out of beds, a recent rise in COVID-19 hospitalizations has had an uneven impact across the state.

In the fourth of a series of briefs assessing statewide hospital capacity, researchers from Duke University and the University of North Carolina at Chapel Hill for the first time detailed how the number of patients has shifted in seven different regions across the state.

Hospitalization trends, the authors wrote, "are somewhat more threatening now than they were a month ago."

The areas of greatest concern include the counties surrounding Greenville, Charlotte and Raleigh, which "are experiencing more substantial tightening of near-term capacity than other regions."

The state Department of Health and Human Services as of Thursday counted 857 people hospitalized with COVID-19, and the researchers noted the health care system has been under increased pressure overall as the number of patients has grown.

While it's true that fewer hospital beds are available, the brief notes the growth rate of hospitalizations has decreased overall.

But that decrease has not been uniform.

Their analysis examined hospitalization data across Public Health Surveillance Team regions – collections of counties that divvy up the state into seven distinct parts.

While statewide, the growth rate of hospitalizations in the week prior to June 12 stood at about 14 percent, that growth was negative for the Fayetteville and Triad areas. But the counties around Greenville saw 43 percent growth in hospitalizations during that period.

In the Triangle, it was about 21 percent.

Researchers project that, at the current statewide growth rate, COVID-19 hospitalizations wouldn't tax the health care system's capacity of normal beds for almost four months. That number varies greatly between regions, from less than two months for the Greenville area to just over three months for the Triangle.

But the study's authors acknowledge that there are plenty of caveats to their projections.

For one, the forecasts are highly dependent on the fluctuating growth rate of hospitalizations, which has seen particularly large changes in recent days.

"What is our best estimate of the growth in COVID-19 hospitalizations over the next month? Is it the growth we have had since May 15? Or is the recently rapidly increasing reported case rate a harbinger of faster growth?" researchers wrote. "This is a key point of uncertainty."

Growth rates in hospitalizations are highly dependent on human behavior, which fuels infection rates. And researchers noted in their brief that policies by federal, state and local officials have appeared to impact that behavior, beginning with responses to dire predictions at the start of the pandemic.

"Policymakers and the public then acted and slowed viral spread. That slowing made forecasts more optimistic, which then led to calls for reopening," researchers wrote. "As population mobility and contact rates have changed and the opportunity for community spread has increased, the number of reported cases has also increased."

Even with a sustained growth in patients, researchers say hospital administrators still have plenty of "relief valves" to ease demand and increase capacity.

Surge beds can allow for more patients. Hospitals can again cut back on elective procedures. And they can take advantage of regional differences to transfer patients where there's more capacity to care for them.

There's also the potential change how the state reopens. But the authors wrote that "any chosen strategy involves complex tradeoffs with profound ethical, social and economic strategies."

"The only true long-term solutions are to fully eradicate the virus and/or develop a broadly effective and safe treatment for the disease it causes."