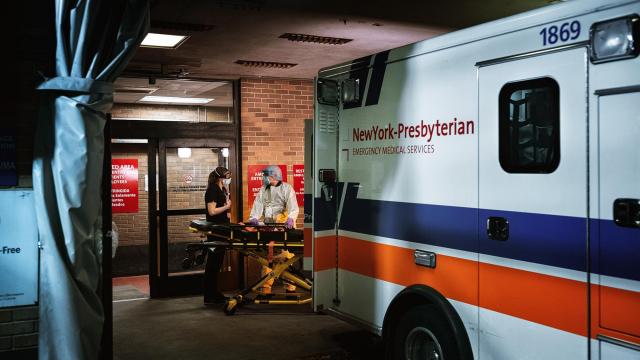 Emergency room visits in the United States have dropped sharply during the pandemic, underscoring concerns that people with serious medical conditions, like heart attacks, are avoiding hospitals, according to a new analysis released Wednesday by the Centers for Disease Control and Prevention.

As the coronavirus spread across the United States this spring, visits to emergency rooms decreased by 42% over four weeks in April, compared with the same period in 2019. The declines were greatest among women and children 14 and younger, and in the Northeast.

While there have been a recent rebound in visits, the CDC noted, the volume of visits remains significantly lower. Visits to the emergency room were down 26% in the last week of May, compared with figures from a year earlier.

While hospitals in hot spots like New York City were often overwhelmed by the numbers of seriously ill coronavirus patients, and admissions for infectious diseases and pneumonia climbed, there were drastic declines in the volume of patients who typically come to the emergency room for care.

“It was eerily quite,” said Dr. Thomas Balcezak, the chief clinical officer for Yale New Haven Health, who recalled walking through his hospital system’s emergency departments at the peak of the epidemic and being struck by the lack of patients.

In a possible sign that patients were coming in later and sicker, he pointed to the CDC’s finding that visits for conditions like ventricular fibrillation had increased, suggesting that patients might have had heart attacks and initially stayed home before coming in with a worsening condition. “That’s worrisome,” he said.

The agency’s report highlights the monthslong decline in general care as the virus took hold and overwhelmed some hospitals. Across the nation, hospitals stopped performing elective procedures, whether a routine mammogram or a knee replacement, even if they were not experiencing a surge in virus patients. While they have slowly begun resuming care, many patients, concerned about potential infection, continue to avoid hospitals.

“Where are all the heart attacks and strokes?” asked Chas Roades, the co-founder and chief executive of Gist Healthcare, which advises health systems. He said that many patients were returning for rescheduled surgeries, but that hospital executives were reporting that people, worried about possible infection, continued to avoid their emergency rooms and urgent care clinics.

“This is a national concern that patients are worried that the hospitals, health care systems, physician offices could be more dangerous than grocery stores, hardware stores and other essential businesses,” said Balcezak, although he emphasized there was no evidence that the risks were any higher in hospitals.

In some cases, patients may be opting for virtual visits or some other alternative, said Dr. Stephen Klasko, the chief executive of Jefferson Health, who has seen the declines in visits across all of the system’s hospitals. But in other cases, patients are forgoing needed care, he said. “The real key here is virtual triage,” Klasko said, where someone who feels dizzy or has chest pain can find out if a trip to the emergency room is warranted.

Hospitals are taking numerous steps to ensure patients remain safe from infection, said Dr. William Jaquis, an emergency room doctor who is the president of the American College of Emergency Physicians. Emergency rooms are not only less crowded, he said, but they have taken a number of steps to screen patients for potential infection and to make sure both patients and providers wear masks. Patients who may be infected are treated in separate areas.

Congress has responded to the hospitals’ loss of patients and resulting revenue by providing as much as $175 billion in funds to hospitals and other providers, but much of the money has gone to the largest, most profitable institutions, compared with medical centers in rural communities or those that serve low-income patients.

While emergency room visits for minor ailments like stomach pains, earaches and sprained ankles have been far fewer this year, agency officials pointed to a more disconcerting drop in the number of people who arrived with chest pain, including those experiencing heart attacks. There were also declines in children requiring emergency help for conditions like asthma.

“Health messages that reinforce the importance of immediately seeking care for symptoms of serious conditions, such as myocardial infarction, are needed,” the CDC officials said. They added that people should be encouraged to reduce their potential exposure to infection by using telemedicine and other methods of triage to determine whether they need to go to the hospital.

But the officials also said the drop in emergency room visits could affect people’s ability to get care when they have no other alternative sources. People who use the emergency room “as a safety net because they lack access to primary care and telemedicine,” they said, might be disproportionately affected if they avoid seeking care because of concerns about the infection risk.”

“It’s made that access to care even harder,” said Jaquis of Yale. “We’re not seeing them in the emergency department.”

The analysis of visits from the National Syndromic Surveillance Program, which collects real-time electronic health data, representing nearly three-quarters of all emergency room visits in the United States, was published in an early release of the Morbidity and Mortality Weekly Report by the CDC.