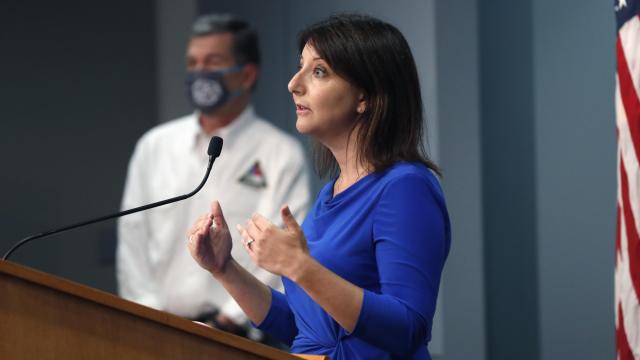 Raleigh, N.C. — Mid-afternoon on Thursday, Feb. 13, Laketha Miller sent an email to division directors at the North Carolina Department of Health and Human Services, asking them to use a new code to track the amount of time DHHS employees spend working on tasks related to the coronavirus.

Eight months later, the timekeeping code has tracked hundreds of thousands of hours that DHHS employees have spent responding to the pandemic – 639,491 regular hours and 117,759 overtime hours as of Oct. 5, according to a spokesperson.

The email from Miller was one of hundreds that came into DHHS Secretary Dr. Mandy Cohen’s email inbox between mid-January and mid-March about how the agency should prepare for and respond to the virus. The emails were obtained by the N.C. Watchdog Reporting Network through a public records request.

Read together, the emails between DHHS employees and other senior state government leaders paint a picture of how early the state started to monitor the virus and how uncertain health officials were about what would play out.

Cautious monitoring, then China built a hospital in 10 days

For Cohen and her team at DHHS, monitoring the virus started as a routine exercise for members of the communicable disease team.

Cohen said the team started tracking a new virus in China in late December or early January. The first update from that team appeared in DHHS emails on Jan. 14.

That email, with the subject line “Novel Coronavirus identified in Wuhan City, China,” was a summary of what DHHS knew about the disease at that point. Erica Wilson, a medical doctor who is the medical director for vaccine preventable and respiratory diseases in the Communicable Disease Branch of DHHS’ public health division, authored the email.

She described the emerging disease as “Pneumonia associated with a novel coronavirus” in China.

The summary said health officials in China had reported a cluster of cases on Jan. 5, with the earliest known onset being Dec. 12, 2019.

Wilson’s summary also included a recap of a call with the Centers for Disease Control and Prevention the day prior.

While based on current information the risk to the American public is thought to be low, preparedness steps and precautions are being taken. CDC is currently taking the following precautions:

- An updated HAN will be released later this week with information on infection control, laboratory testing, and the definition for a Patient Under Investigation (PUI)

- CDC laboratories are currently able to test for the novel coronavirus via sequencing. They are also working to develop an assay to detect the virus more easily that would then be shared with state public health laboratories

“Thanks – keep us posted on any changes here,” she responded.

In an interview on Monday, Cohen said she and her team were monitoring the virus throughout January – mostly getting new information in small pieces. She said it would be weeks before she realized just how problematic the situation might be: when Chinese officials quickly built a hospital to handle an influx of patients.

That hospital was announced in late January and finished Feb. 3, according to the New York Times.

According to the Times, workers build the 1,000-bed Huoshenshan Hospital in 10 days.

“I remember saying to the governor ... 'I don't know if you’ve seen this viral video, but I don't think we're going to be able to put up a hospital in 10 days, like they just did.'”

Cohen took that as a sign she and other leaders in North Carolina needed to start preparing.

“The fact that they shut, you know, the way that they shut down for an economic superpower like that, was like, ‘Oh, my goodness,’” Cohen said. “You just saw how quickly it escalated from that.”

Standing up the COVID-19 taskforce

As part of that effort, the emails show, DHHS communications staff wrote two draft messages they sent to Cohen for final approval on Feb. 7 that would be given to local health departments to send to reporters who asked questions about possible cases of the virus in their communities.

One pre-written answer was about instructions to travelers who may need to self-monitor. The second was for local health departments to give to reporters who ask about patients being investigated for having the virus.

“To date, there are no confirmed cases of 2019 novel coronavirus in North Carolina. To protect individuals’ privacy, the North Carolina Department of Health and Human Services will not publicly disclose the number of people being evaluated for the virus. Appropriate infection prevention measures will be taken if and when a person is under investigation. Should there be any positive test results, the total number of confirmed cases in North Carolina will be added to and updated on the DPH 2019-nCoV website.”

Before that officially came to be, though, leaders from DHHS and the state Division of Emergency Management had to work out key details, including who would lead the effort.

Ultimately, Tilson and Sprayberry were announced as co-chairs of the group.

Once that was worked out, both Moore, the epidemiologist, and Cohen wanted to make sure the task force wasn’t duplicating the work of other groups.

Eventually, state officials announced the task force in a press release on Feb. 11. The first meeting was Feb. 17.

A draft agenda included in planning emails shows the task force members would focus on questions including how to move from containment to mitigation and how to plan for a large number of cases, including stockpiling personal protective equipment, counting hospital beds and exploring mobile hospitals.

Cohen said she and other state officials created the task force with the aim of improving communication among the various agencies that would need to respond to a pandemic and putting a team together that could execute the state’s pandemic plans.

“It was about formalizing some of those processes just a little more,” Cohen said Monday. “It's also to signal to the public. ‘Look, look, we're on this, like, we're working on it.’”

“I think it was an important unity moment at a time when you can see a crisis starting, I think it's important to show that we're prioritizing the work and we're coming together.”

North Carolina gets its first case

Cohen and Secretary of Public Safety Erik Hooks, along with their staffs, briefed Cooper and other senior administration leadership on March 1.

A carefully-worded press release – approved by leadership at DHHS as well as the Governor’s Office – was distributed to the media. They sent a separate but similar email to lawmakers in the General Assembly.

“We have our first confirmed case of COVID-19,” the email started. “The test, conducted by North Carolina State Laboratory of Public Health, is presumptively positive and will be confirmed by the U.S. Centers for Disease Control and Prevention (CDC) lab. The person is doing well and is in isolation at home.”

“Today’s announcement represents an isolated case, and COVID-19 is currently not widespread in North Carolina.”

Soon after the email to lawmakers, the DHHS legislative liaison emailed Cohen and others that he was getting follow-up questions, including which airport the person who was presumed positive traveled through.

But DHHS leaders decided they wouldn’t share any more information, not with lawmakers nor with reporters who inundated the press office with their own questions.

The case turned out to be a Wake County man who had visited a nursing home in Washington state that was the site of one of the first U.S. outbreaks.

“I think through all of this, whether it was understanding those first few cases or as we make decisions now, we've had to balance a number of factors. We have to protect public health, we have to protect privacy,” Cohen said.

“Even with the very little information we gave, people lost their privacy. ... It was a scary time. People thought they were blaming those first few people that they brought the virus here to us. ...There was both a privacy but also a safety aspect of those particularly early cases.”

Now, seven months since the first positive case in the state, Cohen said she feels her team was well-prepared, at least as well as any organization could prepare for a global pandemic.

“You sort of have to put yourself back into March to be like, well, what did we really know?” Cohen said. “What are we hearing from the experts? At the (World Health Organization), at the CDC? What were we learning from scientific studies? So, it was ... all coming very, very quickly.

“I think your ability to respond to a crisis starts with preparation,” she said. “We had plans. But do I think we were 100% prepared for what we're experiencing now? No.”

This story was jointly reported and edited by Frank Taylor of Carolina Public Press; Ames Alexander of The Charlotte Observer; Dave Hendrickson and Carli Brosseau of The News & Observer; Nick Ochsner of WBTV; Emily Featherston of WECT; Randall Kerr of WRAL; and Jason deBruyn of WUNC.