Editorial: If Trump tells followers to mask-up, they will, and he should 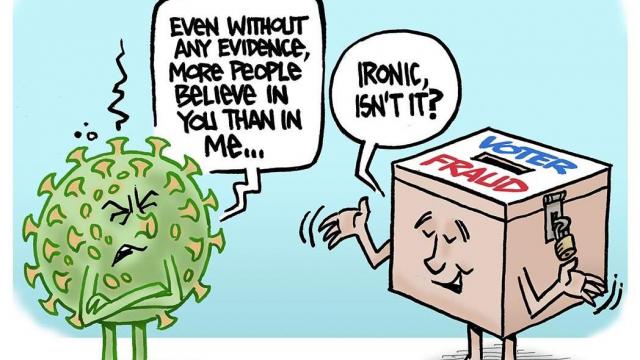 Because Donald Trump says so, millions of Americans believe he’s won an election he lost.

Because Donald Trump says so, they believe there was massive fraud – even when his own election security officials label it “the most secure in American history.” They just pass that off to a ‘deep state’ conspiracy encouraged by the news media.

There is no debating millions who devotedly take as Gospel, every syllable that passes from Donald Trump’s lips.

It is time Trump used his mesmerizing powers of persuasion over his devoted followers to the common good – to be a REAL leader in the effort to control the COVID-19 pandemic. President Trump, with a short pronouncement, can enlist his devotees in a movement that will reopen our schools, get businesses open, avoid overcrowding hospitals and save thousands of lives.

President Trump, go before the nation. Engage your vast social media networks along with FOX, NewsMax, and One America News. Address the pandemic and how your supporters specifically can follow you to control the spread of COVID-19.

Dramatically whip from your coat pocket a protective mask emblazoned with the Presidential Seal. Stare sternly into the television cameras. Adjust the mask properly over your face and say:

“Folks, the election is over. Forget the politics. I want you to wear a mask to show you’re tougher than COVID-19. Show you want to protect your family and friends and defeat COVID.”

If infection rates and death rates respond by declining, the president will be able to declare – with unfamiliar veracity – victory and success.

That’s fine, too. If the president’s actions – and those of his flock of true-believers -- did reduce COVID-19 spread and slow the death rate -- that would be a victory and Trump could crow about it!

How about it, Mr. President (for at least the next nine weeks)? Take the politics out of protecting the public health. Take some action that will REALLY get the nation back to “normal” sooner.

Donald Trump, get behind the mask and millions of others (as many as 73.8 million, based on the election) will follow.