Editorial: Relief package should be about helping Americans, not just boost Trump's reelection 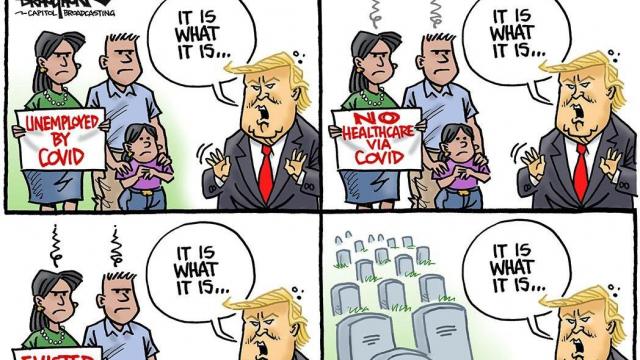 Are senators Richard Burr and Thom Tillis going to sit back in silence and inaction, just doing what Donald Trump thinks is in HIS best interest?

Are they going to do their jobs – and demand the same of their fellow senators – to work with the House of Representatives and produce a pandemic economic recovery package that is best for North Carolinians and the nation?

Trump signed four executive orders Saturday at his exclusive New Jersey golf resort that he contends will provide economic stimulus and assist those vulnerable because of the COVID-19 pandemic. Even his own aides confess the president’s actions fall short.

In many ways it puts greater burdens on states rather than providing relief to governments already struggling with declining revenues and antiquated unemployment systems slowing distribution of much-needed benefits.

It is a desperate, inadequate and likely illegal effort to appear to come to the nation’s rescue amid a congressional logjam. Truth is it will prompt lawsuits more than promote economic stability. It is a needlessly concocted crisis that the president and his congressional enablers will be accountable for.

Trump and Senate leader Mitch McConnell’s refusal since May to seriously negotiate with the House of Representatives is more of a misguided try to protect their political fortunes in November than help those most in need today.

Trump’s executive orders shortchange the needs of millions of out-of-work Americans to shelter their families, feed their children and provide other basic services that keep the nation operating and the economy from complete collapse.

Even more so, Trump’s effort to delay payroll taxes is a camouflaged attack on the integrity of Social Security, risking the future of a program that is critical to every Americans' economic security in retirement.

Disingenuous statements from Trump and McConnell seek to blame Democrats for playing politics. Trump’s own statements belie that shallow contention and reveal it is he and the U.S. Senate leadership that are playing politics -- taking up for big business over working Americans.

Trump said he might be able to make payroll tax delay retroactive to Aug. 1 and make permanent payroll tax cuts if he wins reelection. “If I win, I may extend and terminate. In other words, I’ll extend it beyond the end of the year and terminate the tax.”

This should not be a difficult choice for North Carolina’s two senators – particularly Tillis who is in the midst of an intensively competitive re-election effort.

Burr and Tillis need to speak up to demand Trump makes sure states – particularly North Carolina – have the resources they need. they should demand the Senate engage in serious and sincere talk with the House about a truly comprehensive relief package that HELPS NORTH CAROLINIANS AND ALL AMERICANS FIRST.

Speak up and stand up for the survival of families, main street businesses, local agencies and state government services. Do not cave to inappropriate presidential power and Donald Trump’s vanity.