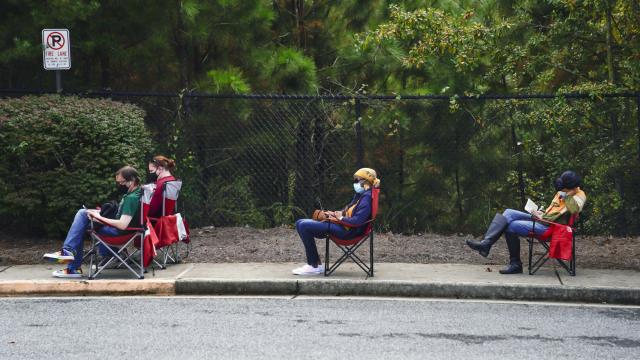 Listening to President Donald Trump talk about what’s going on as citizens vote? Hearing the leaders of North Carolina’s legislature? The images they conjure are of chaos at polling places. Confusion and bickering as voters mark their ballots. But when Americans actually vote – whether by mail or at early-voting in-person polling places -- they are experiencing something very different.  In many ways, we wish the rest of our daily conduct was as orderly and considerate as people are experiencing at polling places – especially those in North Carolina.

On display is a demonstration of mutual consideration and respect that stands in stark contrast to the barking and bickering in televised candidate debates and sharp-edged attack advertising that belittles and enrages. Then there is the judicial jousting in courtrooms amid the unrelenting efforts to make it more difficult for some citizens to vote and inventing new ways to void otherwise legitimately cast ballots.

Citizens display just how much they value their opportunity – and obligation – to vote. And how much they respect their friends, neighbors and fellow citizens for doing the same. From state officials down to polling place coordinators, plans have been made and practices put into use that make voting efficient. As a result voters are polite, knowledgeable and proud.

Outside the voting places, in appropriate designated areas, partisans make their final pitch and politely ask voters if they’d like a copy of a Democratic or Republican-leaning sample ballot. There’s hardly any cajoling just a brief gentle effort to persuade.

Voters almost uniformly show up with protective masks. Even without markers, they respectfully line up keeping socially distant from others.

The atmosphere inside the polling places is almost cheerful. Each voter is greeted by a worker who inevitable says, before anything else, how glad they are to see them and thanks them for voting. They quickly go through the formalities and get each voter the appropriate ballot.

That’s not to say everything is perfect. Maryann Leonard went to vote in High Point only to find out – much to the contrary of obvious evidence -- that she wouldn’t be allowed to cast a ballot because she was dead. No zombie voting in North Carolina.

She was clearly not happy with the inaccurate diagnosis. After some scurrying and calls by elections officials, a clerical error was discovered (someone with a similar name and birthdate had, in fact passed away but it wasn’t the same Maryann Leonard). https://myfox8.com/news/high-point-woman-goes-to-vote-told-shes-ineligible-because-shes-dead/

The mix-up was cleared up. Appropriate apologies made. She DID cast her ballot.

The COVID-19 pandemic and all the adjustments people are making to deal with it have heightened the anxieties in an already highly charged, hotly contested election year. Even longtime election workers like Patrick Gannon, who as a journalist covered elections before going to work for the State Board of Elections four years ago, have been awestruck by what he’s seeing at polling places this year.

About a third of North Carolina’s 7.3 million voters have already cast ballots. Gannon took to Facebook to express his admiration.

“By-mail ballots are still coming in by the truckload, in quantities many times higher than we’ve ever seen before in this state. We’ve had county elections workers with Covid and county election workers who have lost loved ones in recent days, but continue to work,” Gannon said.

“We’ve had 60,000 North Carolinians offer to help work the polls during this election, despite the risks of contracting a deadly disease. I could go on and on about the number of hours state and county election officials are working right now to ensure all eligible voters can successfully cast a ballot during a pandemic. We all love this country and cherish every single American’s right to vote. Please know that elections officials care deeply about what they do and take great care to try to ensure every eligible vote counts.”

Want to witness our nation and state at its best? Just go to a North Carolina polling place between now and Oct. 31 for early in-person voting and on Election Day, Tuesday, Nov. 3.

It is all there in plain sight. Just vote.