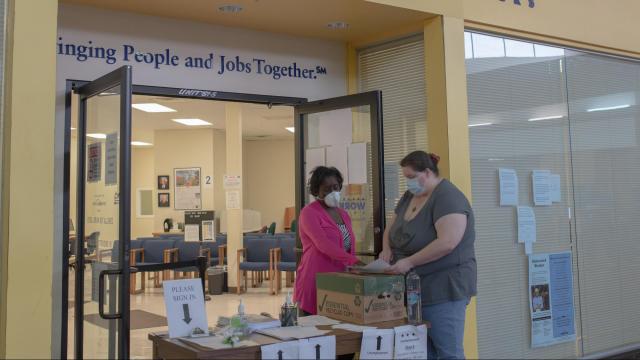 CBC Editorial: Wednesday, April 29 2020; Editorial #8535
The following is the opinion of Capitol Broadcasting Company. (This editorial has been updated, see the note below)

There is an item that should be at the top of the state legislature’s agenda – but is barely on the list of items to be addressed in this COVID-19 session. Be assured, the 876,000 unemployed North Carolinians who have filed claims in the last five weeks are aware of it – and if they aren’t, they will when their benefits may run out six weeks before those who are out-of-work in other states would lose theirs.

Maybe they’ll realize it right way, spotting North Carolina’s weekly payments are $110 a week less than what folks in others states in similar circumstances get.

Why? Because the folks who run our state legislature believe those who don’t have a job but can work do it out of choice. They’re leeches looking to the government to pay them so they can laze around. It’s the same lame reason they’ve refused to expand Medicaid. Listen to House Speaker Tim Moore’s confession right here. Moore doesn’t seem to understand that the eligible group is, in fact, working.

Since the legislature’s passage of the 2013 “reforms” to the state’s unemployment system, that bestowed a tax break to state’s businesses at the expense of wage-earners’ security, North Carolina has ranked at the bottom of how states care for those who are out of work.

These are not people looking for a free ride. They were not forced off the job because they weren’t working hard or their employers lacked business. They are off the job by governmental order -- to save lives and make sure our healthcare system isn’t overwhelmed by frivolously spreading a deadly disease that could destroy our communities and economies.

They deserve better than bottom-of-the-barrel benefits. They deserve, at a minimum, benefits that are equal to the national average to help them get by until they, and the rest of the state, can get back on its feet.

They deserve better than the “Covid-19 Response Act-Economic Support” bill introduced in the House Tuesday that offers mainly technical changes but fails to provide the fundamental changes North Carolina workers need and deserve.

Changes to North Carolina's benefits should be made now and should be permanent. At a minimum, North Carolina's unemployment benefits should meet the national average and extend to the same period as other states (26 weeks, plus the 13 weeks added in the stimulus package). They should also include self-employed and independent contractors and workers previously not eligible for unemployment benefits but now covered by the COVID-19 stimulus package.

Legislators should hold out their hands in support of North Carolina’s workers by expanding and extending unemployment benefits now. If the legislature will not help the 876,000 North Carolinians that filed for unemployment in the last five weeks, who will they help? Why are they there?