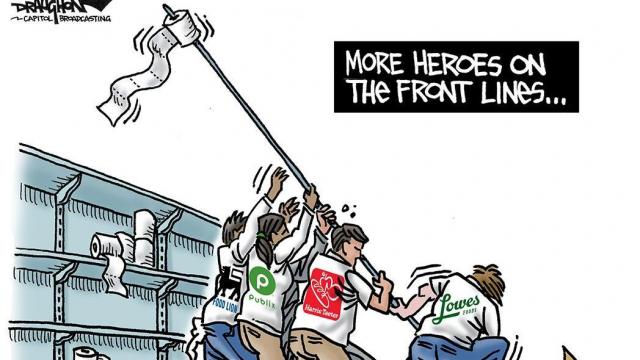 CBC Editorial: Thursday, March 26, 2020; Editorial #8525
The following is the opinion of Capitol Broadcasting Company.
To listen to legislative committee meetings, go to this page, and select the appropriate room's audio feed.

It was the first public gathering – mostly via conference call to heed concerns for the public health and safety and respect appropriate social distancing – of a working group of the state House of Representatives Select Committee on COVID-19.

The importance of the occasion was marked by House Speaker Tim Moore – who had made himself chair of the full select committee– who delivered stern and ominous-toned opening remarks about the seriousness of their work and the mission of the Economic Support Working Group.

While an observer would feel the sense of duty and purpose of those gathered – and that’s a good thing -- there was also a feeling that something was missing.

Absent was Gov. Roy Cooper and those helping him lead the effort to confront, control and deal with the various impacts of the COVID-19 outbreak on our state.

Legislative staffers presented broad overviews and an assistant secretary of commerce offered an update on the status of unemployment claims.

But when Rep. Keith Kidwell, a Republican from Beaufort County, raised concerns about the way income tax filings would be handled, what might be done to interest rates charged, penalty fees and other issues, there apparently wasn’t anyone from the state Revenue Department to explain what current policy is and what options were being reviewed to adjust so people looking to cope in the current health crisis were not unfairly penalized or hurt.

Facts and the people who know them. That’s what was missing from the meeting.

While there has been much talk of the emergence of true communication between the legislature and the governor’s administration, there was little evidence of it at the session Wednesday.

The select committee and its working groups need to hear first-hand about what is going on and what’s being done. That way the legislators will be better positioned to draft the legislation that will support those efforts and not erect impediments.

Has the habit of simply ignoring the administration become so reflexive that it doesn’t even come to mind to include cabinet secretaries and Gov. Roy Cooper’s key aides in discussion? Is the only time they’re called upon to testify is when they’re going to be called on the carpet?

This isn’t about the legislature passively yielding to what the governor does or doesn’t want. It it is about going to the best source for information; making those people and their knowledge and experience available; hearing what they have to say; questioning their assumptions – and in the end working with the governor’s program to make it effective.

It is a very basic element of developing knowledge-based policies and understanding the impact of decisions.

Where was Emergency Management Director Mike Sprayberry, who has made it his mission to acquire the supplies our hospitals desperately need to provide care to patients and assure the safety of our healthcare providers?

Where was Revenue Secretary Ronald Penny – or another top department leader, to provide the legislators with a status report less than a month before the April 15 tax deadline.

There are lot of questions. Legislators need to be asking them. Administration officials need to answer them.

North Carolinians have seen in any number of areas, the impact of legislating by hunch and assumption. The havoc created and damage done by the notorious House Bill 2, legislation that restricted access to public restrooms by birth gender, is exhibit A.

It is no exaggeration that the physical and economic health of North Carolina rests with the policies that will be developed in the coming few weeks.

The legislature needs to hear from, learn from, question and challenge, those who know what’s going on and understand it.

If legislators are going to return to Raleigh to craft legislation they need to be armed with facts and not hunches. Otherwise the cures they propose may end up being worse than what ails us now.