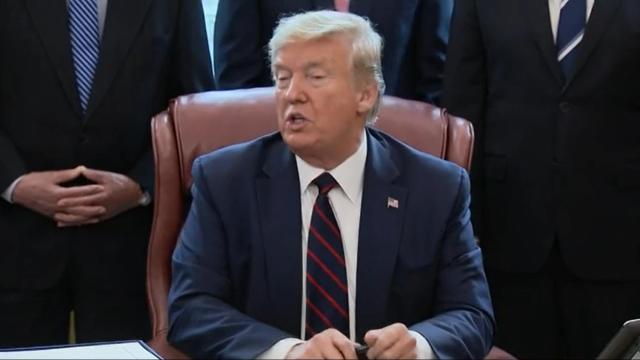 It was the middle of May – more than seven months ago – that the House of Representatives passed a bill to provide an additional wave of COVID-19 relief to provide more stimulus for the economy and to help state and local governments, millions of unemployed workers and their families.

The Senate, since receiving the bill in May, did nothing for months – no hearings on the bill; no alternative legislation; no concern for the plight of the nation’s workers and families. All the American people got was partisan posturing as U.S. Senate Leader Mitch McConnell, R-Kentucky, complained of a so-called “blue-state bailout” for state and local governments.

Through the summer and fall campaign season, members of the Trump administration talked with Democrats in the House and Senate about a deal, but McConnell still didn’t act. He was off the radar, seemingly abdicating any Senate role and simply putting it all in the hands of the White House and its disingenuous negotiators. As things turned out, the White House negotiators had little notion of what President Trump wanted, no sense of what the Republican-led Senate would pass and no credibility with the Democratic-led House.

The final passage and signing of the relief bill was the apotheosis of dysfunction that has plagued Washington amid the reign of President Trump and McConnell’s rule of the Senate. With the impending shutdown of much of the federal government and the expiration of unemployment benefits to millions of jobless workers and their families because of the pandemic, the legislation was passed and sent to Trump for his signature. (It should not go without note that Republican Reps. Ted Budd and Dan Bishop were the only North Carolinians in Congress to vote against the relief package. Reps. Greg Murphy and Mark Walker failed to vote. It passed 92-6 in the Senate and 359-53 with 17 not voting in the House.)

The 5,593-page deal, that supposedly had been brokered with White House involvement and approval, was quickly labeled by Trump as a “disgrace.” It was a reaction that surprised his own advisers who helped negotiate the deal. For five days Trump ranted, his staffers were perplexed, congressional Republicans were silent and Democrats expressed outrage that the much-needed aid might be subject to a presidential veto.

There was probably more organization and coherence inside one of the clown-packed Ringling Brothers circus rail cars the state Department of Transportation is now trying to sell then to the final resolution of the relief bill. Seemingly out of nowhere, the president demanded that direct relief payments be $2,000 and not the $600 that Republicans had whittled it down to.

The document requiring the president’s signature didn’t even accompany Trump to his Florida golf resort, where he is spending the year-end holidays. It had to be flown down. Even then, there was uncertainty as to whether it would get a presidential signature.

Late Sunday Trump signed the bill, but not until after allowing additional unemployment benefits – especially critical in North Carolina where benefits are among the nation’s skimpiest – to lapse. Also suspended by Trump’s tardiness was the special benefits to self-employed workers and others not traditionally covered by state unemployment programs.

North Carolina’s state employment benefits agency provided only tepid reassurance to worried citizens on its website: “A federal COVID-19 relief package that provides additional unemployment benefits has been signed into law. DES is awaiting federal guidance needed to implement the new and extended benefits. We will provide more information as it becomes available.”

That’s little comfort to the 1.4 million who have filed unemployment claims in the state since the Pandemic struck in March or the nearly 1 million who have received payments and wonder how long they’ll last.

North Carolina hospitals are starting to run out of bed space. While many North Carolina families were pondering whether they’d need to go to the grocery store, the food bank or a bare cupboard to provide for their next meal, the president was taking to Twitter to chastise fashion magazines for failing to give his wife appropriate respect by not putting photo shoots of her on their covers during his presidency.

Dysfunction, incompetence and lack of compassion are the hallmarks of the Trump presidency. In about three weeks as the new administration arrives, Congress needs to get serious about a pandemic recovery package. It needs to include eradicating the COVID-19 virus; helping desperate cities and states; along with launching a major construction initiative to rebuild and expand the nation’s infrastructure.

What months ago might have been a show-piece of cooperation and compromise is instead, a clown parade that would embarrass P.T. Barnum.