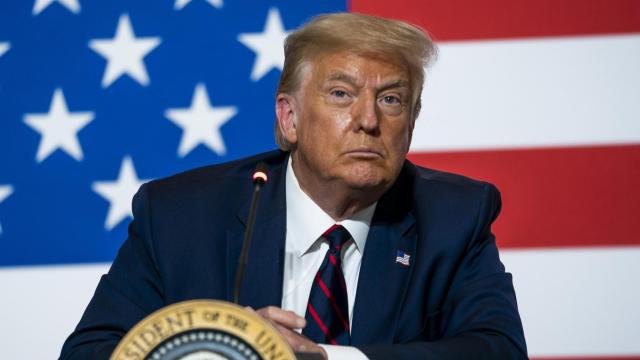 Another Thursday in Donald Trump’s twisted and Tweeted America?

The world gathers at a church in Atlanta. It says farewell to a soulful man: Beaten bloody and unconscious by jack-booted thugs; Cast upon by snarling dogs; Locked behind steel bars for simply saying it was his – and every citizen’s -- constitutionally-given right to cast a ballot and NO ONE could deny it.

A self-absorbed man, President Trump, who just days ago was in North Carolina demanding children and educators return to school classrooms regardless of the life-threatening dangers of the COVID-19 pandemic, frivolously tweeted that he wanted the fall election delayed.

“With Universal Mail-In Voting (not Absentee Voting, which is good), 2020 will be the most INACCURATE & FRAUDULENT Election in history. It will be a great embarrassment to the USA. Delay the Election until people can properly, securely and safely vote???”

What a dim-witted, shameful, selfish and wrong notion. Donald Trump would have been better to have spent his time Thursday morning paying attention -- and taking to heart -- the words from Presidents George W. Bush, Barack Obama, Bill Clinton, as well as the others. They didn’t as much memorialize John Lewis as praise the objectives of his life’s work – uplifting others; demanding that EVERYONE – regardless of race, gender, sexual preference, age or disability – is entitled to the blessings established in our Declaration of Independence and Constitution.

What a day of contrasts.

We heard about a righteous man, raised in poverty and segregation being celebrated for his work to extend voting rights that were denied African Americans.

We were confronted by a self-centered a man raised in wealth and privilege, looking to divide the nation and discredit the integrity of the election.

But Donald Trump’s tweets don’t provide any reason to delay the election. Not surprisingly, he is misinformed, misguided and intentionally misleading. Mail-in voting is NOT any more prone to inaccuracy or fraud than other typical forms of voting. We are not fooled.   His objectives are to confuse voters and drive them away from the polls.

Do what John Lewis would do. And thanks to him – and many others with him -- we don’t have to worry today about getting our heads bashed in to do it.

Make sure you are registered to vote. There are 7.03 million people registered to vote in North Carolina. But there are as many as 1.2 million who are eligible but aren’t registered. It’s easy. You can even register online if you have a signature on file with the state Division of Motor Vehicles.  To do it, or find out more, click here

Make sure you vote. In the last presidential election more than 2 million of the state’s 6.9 million registered voters DIDN’T cast a ballot. Don’t let others speak for you. Early voting sites will be finalized shortly. Find out when and where you can vote here.

Help make sure everyone can vote. The local elections officials need paid and volunteer workers. Because of the demands of the current pandemic, there is funding to pay hundreds of people to help their communities make sure everyone who wants to vote gets to do it. Staff a polling place during early voting and on Election Day. Help set up and close polling places.  Check in voters and distribute ballots.  Assist voters who request it.  Help people vote and get paid.  Click here for how to sign up.

Embrace John Lewis’ optimism and faith. Get out and vote.