Raleigh, N.C. — Dr. Mandy Cohen, the secretary of the state Department of Health and Human Services who quickly became the public face of North Carolina's response to COVID-19, is stepping down.

Her successor, Kody Kinsley, was sworn in as DHHS Secretary on Saturday at noon, just in time for the new year.

Kinsley has been serving as DHHS' chief deputy secretary for health. 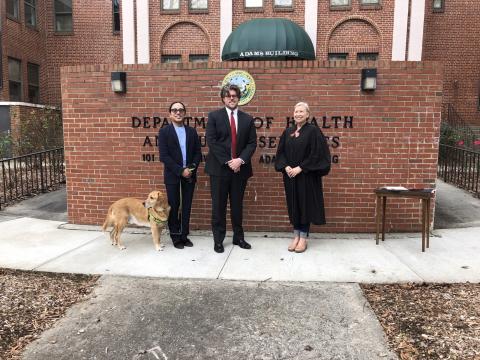 “Mandy Cohen has shown extraordinary leadership during her tenure, and she has worked every day during this pandemic to help keep North Carolinians healthy and safe,” Cooper said in a statement. “We are stronger because of her efforts, and I am enormously grateful for her service. She has built a remarkable team of talented people, including Kody Kinsley, and I know he will continue the strong legacy of competence, effectiveness and efficiency as he takes over as secretary."

Before COVID-19, most North Carolinians likely wouldn't have recognized Cohen on the street. But when the first cases were reported in the state early last year, Cohen began leading press conferences with Cooper, and she became one of the most recognizable faces of the pandemic in the state.

During the pandemic, Cohen was interviewed by WRAL News and other groups hundreds of times. In the very beginning, she advocated for the first patients diagnosed with COVID-19, calling bullying unacceptable. When masks became the norm and requirements began to take effect, she reminded North Carolinians week after week to practice social distancing and cover their faces.

More recently, she's led the effort to provide information on the importance of vaccines and distribute them across the state.

In May, Cohen threw the first pitch at the Durham Bulls' home opener, their first home game since before the pandemic.

"It has been an honor of a lifetime to serve this state at such an important moment in history," Cohen said Tuesday during a routine briefing on the pandemic that often became more focused on her than on the virus. "Certainly, the last two years have been quite a marathon, and I’m so proud of all the work we’ve been able to accomplish."

She has led DHHS since early 2017, and she said Kinsley is ready to take the baton from her and continue the agency's efforts.

"Whether it was new boosters or this new variant, they were jumping into action in ways that were fantastic," Cohen said of Kinsley and the rest of her staff. "I felt I was now able to take this step back."

Kinsley, a Wilmington native, served in the U.S. Treasury Department under both President Barack Obama and President Donald Trump and also in the U.S. Department of Health and Human Services.

In the state DHHS, he has overseen the response to the opioid epidemic, increased investments in services and supports for individuals with behavioral health needs and developmental disabilities and been a driving force behind the pandemic response, including vaccine distribution efforts.

If he is confirmed by the state Senate, Kinsley will be the first openly gay cabinet secretary in North Carolina history.

Sen. Jim Burgin, R-Harnett, co-chairman of the Senate Health committee, said Tuesday that he has worked with Kinsley throughout the pandemic and credited Kinsley with helping smooth out the state's vaccination process after a bumpy start late last year.

“I’m excited to work with him. I think he’ll do a great job," Burgin said, predicting an easy process.

Cohen, an internal medicine physician, graduated from Cornell University and received her medical degree from Yale School of Medicine. She obtained a master’s degree in public health from Harvard University's T.H. Chan School of Public Health. She was elected to the National Academy of Medicine this year.

Unlike Cohen, Kinsley isn't a physician, but Cooper called him "the most qualified and experienced person for the job."

Only three of the last 10 DHHS secretaries have been physicians.

Cohen's decision to step down came as a surprise to Pilar Rocha-Goldberg, president and chief executive of El Centro Hispano, in Durham. The pair worked together on outreach to the Latino community during the pandemic.

"You feel like losing something when people like her step down," Rocha-Goldberg said. "It’s very, very important to see a person like her in her position coming [and] talking directly to them. I think that made a huge difference in how the community also responded to this pandemic."

Before working for the state, Cohen was chief operating officer and chief of staff at the federal Centers for Medicare and Medicaid Services. In North Carolina, in addition to pandemic response, she led the transformation of the state Medicaid program from a fee-for-service mode, to a managed care format and worked to reduce health care disparities in historically underserved communities and populations.

"Secretary Cohen's leadership throughout her tenure at the DHHS has helped our state navigate turbulent times," Senate President Pro Tem Phil Berger said in a statement. "She made herself available to legislators to answer questions and kept us informed about issues facing the department. She was also instrumental in successfully implementing Medicaid transformation. I want to thank her for her service to the state and wish her well in her future endeavors."

Cohen didn't elaborate on her future plans on Tuesday, other than ruling out a political campaign and noting that she and her family hope to stay in North Carolina.