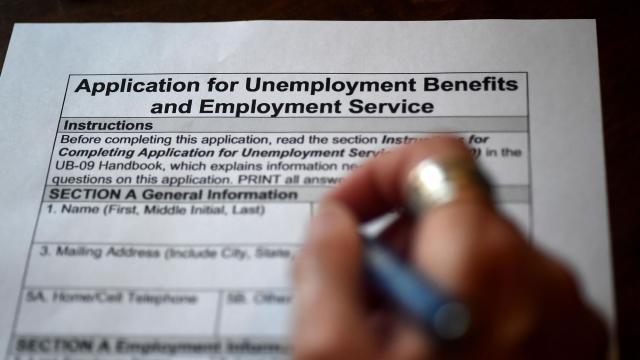 Raleigh, N.C. — A week after federal pandemic unemployment aid ended, Democratic lawmakers and worker advocates on Monday called for the state to step up to help jobless workers in North Carolina.

The boost to weekly unemployment checks from March 2020 through Labor Day – it was initially $600 before being scaled back to $300 in recent months – helped more than 200,000 people in North Carolina, said Sen. Wiley Nickel, D-Wake.

"These families now will have $1,200 less per month to make ends meet, to pay for food, to pay for rent," Nickel said at a news conference. "This is especially hard because our economy isn't what it was pre-COVID. We have not fully recovered."

People out of work now have to rely solely on state unemployment benefits, and North Carolina's rank among the worst in the country.

Nickel is proposing to increase them, increasing the maximum weekly benefit from $350 to $500 and doubling the length of time workers could get benefits, from 13 to 26 weeks.

The state can easily afford the added expense, he said, noting that it has $2.7 billion in its unemployment fund – the second highest reserve in the country.

"The ‘Help Wanted’ signs all over most downtowns show the problem with the economy right now is a labor shortage, not reduced unemployment benefits," Pat Ryan, a spokesman for Senate President Pro Tem Phil Berger, said in an email to WRAL News. "It’s reasonable to assume that paying people more not to work will result in some people not working."

But Alexandra Sirota, director of the left-leaning North Carolina Budget & Tax Center, said the pandemic recovery has been uneven across the state.

A lack of affordable child care is holding back some workers, she said. MaryBe McMillan, president of the North Carolina AFL-CIO, added that other workers have health problems, or care for high-risk family members and don't want to risk exposure to coronavirus.

"As long as the pandemic continues with the Delta variant, there are going to be considerable people that just cannot work in person," McMillan said.