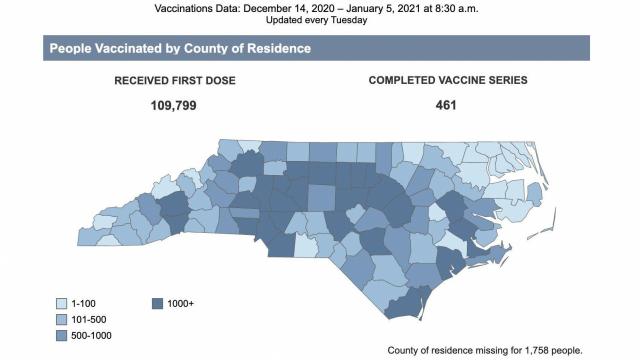 In the January sixth press briefing, Governor Cooper and Dr. Mandy Cohen reported that with the new year, North Carolina has hit new and disturbing records, from reporting a record high of 9,500 new cases in one day on January first to a record 531 new hospital admissions in the last 24 hours. With a test positivity rate of 17.8%, people are understandably focused on the status of the vaccine and how soon they might be able to get it.

A number of readers have asked how to best monitor the status of the vaccine rollout in North Carolina, as well as learn when and where those over 75 can expect to vaccinated.

Catie Armstrong, Press Assistant with the Office of Communications at the NCDHHS, said in the four weeks since NC received its first batch of 85,800 1st doses from Pfizer, the state has received a total of 583,850 1st doses. With a population of 10.49 million, that translates to enough to provide a first dose to approximately six percent of the state. The bulk of those doses are being distributed to those at highest risk in Phase 1a, specifically frontline healthcare workers fighting COVID-19 and Long-Term Care staff and residents.

First dose allocations were based on county population, the number of acute and ICU beds, and the ability to meet Pfizer storage capacity requirements.

The number of allocations has varied each week, based on production and distribution variables, with a large jump the second week when the Moderna vaccine was approved. Moderna sent 175,900 1st doses to North Carolina in its first week, but then roughly one-third that amount in the following two weeks. To date, North Carolina received 85,800 1st doses the first week, 237,325 the second week, 138,800 last week and 121,925 this week. Keep in mind, this does not include the number of second doses the state began receiving this week.

Of those vaccines receives, how many have been administered? The most up-to-date source is the CDC Vaccine Tracker, which is updated every morning at 9 am. North Carolina provides its own vaccine tracker here, though results are currently updated only once a week (on Tuesdays).

According to the CDC vaccine tracker, of the 583,850 1st doses received by the state, 498,450 have been distributed to providers and 137,198 have been administered. How does one explain that roughly just 24 percent of the vaccines sent to North Carolina have been administered? Many officials believe this number is higher, as it can take up to 72 hours from administering the vaccine to having it reflected in the system. It's likely relevant that this initial rollout coincided with the holidays when staffing was less consistent. Additionally, undoubtedly, there can be hiccups as new systems are being deployed and fine-tuned across 100 counties with health departments that work independently. In an interview with Dr. Mandy Cohen on ABC11 late Tuesday night, Dr. Cohen also pointed out that the people trying to administer and distribute the vaccines are the same people who have been batting COVID-19 on the frontlines for ten months, adding, "we want to give everyone a little grace as they work to improve their operations." It is anticipated that software updates this coming weekend will help with reporting.

To speed distribution and administration, the NCDHHS sent out a letter on Monday, January 5th to all providers which included the up-to-date number of vaccines the site had received versus administered, stating,

"We will allocate our vaccination supply to those facilities who are in need because they are effectively administering vaccines. Further, this data may be considered by the CDC in determining how to allocate constrained supply to the states. So, any locations failure to provide accurate and complete data can impact the vaccine supply to the entire state."

On Tuesday, Governor Cooper announced he was mobilizing the North Carolina National Guard to speed up the state's vaccine rollout, tweeting, "Ensuring COVID-19 vaccines are administered quickly is our top priority right now."

It is estimated that there are 435,000 citizens over the age of 75 in the state who are eligible for vaccination during Phase 1b, Group 1. Once counties have finished vaccinating those in Group 1a, citizens over 75 can click here for information on their county's rollout plan or call toll-free 1-877-490-6642.