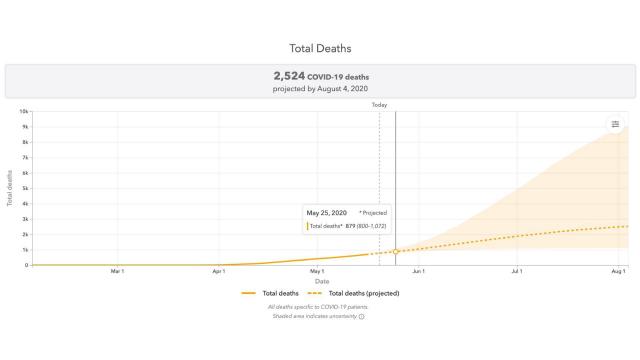 Raleigh, N.C. — New modeling from a group of researchers at the University of Washington has significantly cut the number of COVID-19 deaths expected in North Carolina through August.

Projections from the Institute for Health Metrics and Evaluation now forecast more than 2,500 deaths from the disease through Aug. 4. That's down about 40 percent from the group's projection last week of 4,400 deaths.

Daily deaths are still expected to peak in mid- to late-June, but at a lower rate of nearly 30 a day.

As of May 20, the N.C. Department of Health and Human Services has tallied about 700 deaths from COVID-19 in the state.

N.C. DHHS Secretary Dr. Mandy Cohen cast some skepticism on the IHME modeling in recent days, as have Republican legislative leaders pushing Gov. Roy Cooper to begin reopening the state. The forecasts have been criticized by other national experts as well.

But the newly revised projections more closely align with the latest modeling from the Centers for Disease Control and Prevention, last updated on May 14. That forecast, a composite of projections from IHME, Columbia, MIT and other researchers, estimates about 1,100 COVID-19 deaths in North Carolina through June 6.

The IHME model, by comparison, forecasts about 1,200 deaths by that date.

A spokesperson with IHME has not yet responded to an email sent Wednesday morning seeking comment.

The revisions to IHME's model, dated May 18, decreased the national death estimate by about 3,700 to about 143,000 through August. But not all states' death forecasts were revised downward.

North Carolina saw one of the largest decreases in the forecast compared to other states. Arizona's forecast, on the other hand, increased by more than 3,000.

Writing in their latest update, researchers said the incorporation of six more days of data is a big driver of the changes. But they wrote they also expected to see a bigger jump in cases due to rising mobility – a signal that people are social distancing less.

"Yet such a surge has yet to materialize, suggesting that increases in human mobility alone may not fully capture risk of transmission," researchers wrote.

The group is now trying to figure out how to incorporate other social distancing factors, like mask usage consistent with CDC recommendations, into the model.

They also caution the effects of efforts to relax restrictions on gatherings and business "may not be fully known for a few weeks."

"This is in part because understanding of the way people change their movement and contact patterns in response to eased policies is still emerging; the other key factor is the time lag between viral exposure, possible infection, and full disease progression," researchers wrote.

The group's previous projections had pushed back until later in the summer North Carolina's peak in new estimated infections, a measure that includes both lab-confirmed and untested cases of COVID-19. IHME's May 12 forecast showed the state might see almost 8,000 estimated infections a day in early June.

But the latest revisions now forecast the state is just past its peak in new estimated infections, which are currently projected to be about 2,000 a day and falling.