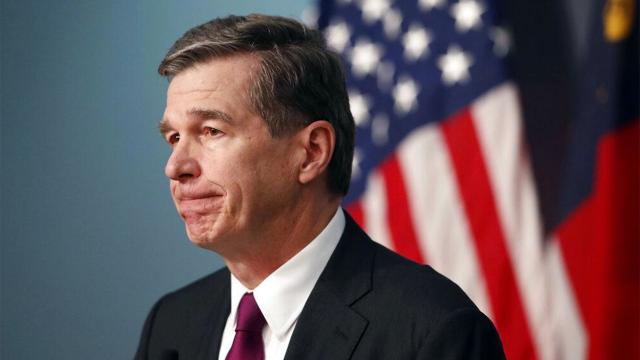 Raleigh, N.C. — Gov. Roy Cooper on Thursday vetoed eight bills that lawmakers passed last week, including four that would have overridden his orders closing various businesses and limiting mass gatherings during the coronavirus pandemic and one that would have undercut his ability to issue such orders.

Republican lawmakers have complained about the slow pace of Cooper's plan to resume business and social activities during the pandemic and have repeatedly tried to push the effort by passing bills to reopen bars, gyms and other businesses. The governor last month vetoed the initial bills to reopen bars and gyms.

On Thursday, he vetoed bills that would have reopened bowling alleys, skating rinks, amusement parks, event venues and other businesses, as well as another attempt to get gyms operating again. He also vetoed a measure that would have prevented cities from using the pandemic as a reason to halt any local Fourth of July parades or fireworks shows sponsored by private groups.

"Tying the hands of public health and executive branch officials in times of pandemic is dangerous, especially when case counts and hospitalizations are rising at a concerning rate," Cooper said in several of his veto messages. "As we see in other states with surging COVID-19 case counts, state and local officials must be able to take swift action during this emergency to prevent a surge of patients from overwhelming hospitals and endangering the lives of North Carolinians."

A fifth vetoed bill would have prohibited any governor from extending a state of emergency for more than 30 days without the approval of the Council of State, a group of 10 statewide elected officials. Likewise, the Council of State would have to sign off on any effort to shut down an entire business segment.

"The Emergency Management Act clearly provides the Governor with statutory authority to direct the state’s response to a public health emergency that could affect the entire state’s population," Cooper wrote in his veto message. "Placing additional bureaucratic and administrative obligations on the declaration of a state of emergency is a substantial change in the law, frustrates executive branch officials’ ability to quickly and efficiently respond to such an emergency by requiring the concurrence of officials with limited involvement in managing the response, and would risk diverting focus from responding to such an emergency."

"Governor Cooper's scattershot executive orders are picking winners and losers instead of delivering real results for the people of North Carolina," Moore, R-Cleveland, said in a statement. "Families and individuals are desperate for a balanced approach to recovery that protects the public's health without permanently devastating small businesses across our state. Actions always speak louder than words, and it is clear Governor Cooper is unwilling to prioritize struggling North Carolinians over his own power."

The other three vetoed bills were as follows:

Senate Bill 808 "contains additional funding for COVID-19 testing and tracing, which are vital in our fight against the pandemic," Cooper wrote. "I will continue working with legislators and the federal government to increase our testing and tracing capabilities to protect North Carolinians from this virus."