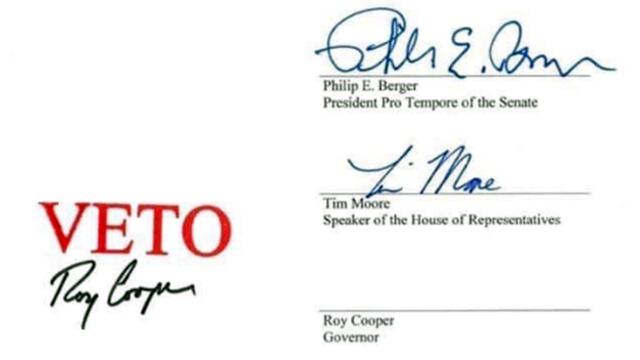 Raleigh, N.C. — Gov. Roy Cooper vetoed legislation Friday that would have forced more school systems to open for in-person instruction, setting up a showdown in the coming days with the legislature's Republican majority.

In his veto message, Cooper said students learn best in the classroom and noted that he's urged systems across the state to offer in-person instruction ever since prominent studies were released saying it's safe to do so with masking and other measures in place.

But Cooper said the Republican-backed Senate Bill 37 fell short in two places: hindering him and other officials from shutting schools down again if the pandemic worsens and allowing middle and high school students, thought to transmit the coronavirus that causes COVID-19 more readily than younger students, back in classrooms "in violation of NC Department of Health and Human Services and CDC health guidelines."

That second concern is up for debate, because the bill has language requiring social distancing and other safety measures as laid out by DHHS. But the Governor's Office has said language lower down in the bill introduces enough vagueness that they fear some systems will open without all of those measures in place.

Cooper said he would have signed the bill if his concerns were addressed, and he reached out to legislative leaders in recent days seeking changes.

House Speaker Tim Moore said lawmakers did work to find common ground with the governor but now must stand up for students and families.

"With this veto, the governor ignored desperate parents, policy experts and students who are suffering from his refusal to let them return to the classroom," Moore said in a statement.

State Superintendent of Public Instruction Catherine Truitt criticized the veto, saying the bill allowed for a safe return to classrooms.

"This bill should have been a win for students, parents and districts across the state. I'm disappointed to see politics at play when we know where the science stands," Truitt said in a tweet.

Cooper's decision puts a handful of Democrats who voted for the measure in the spotlight, particularly in the state Senate, where a Republican override attempt will leave them with a choice: Stay consistent on the bill or back the governor and vote against high-profile legislation they once supported.

GOP lawmakers accused the governor of pandering on the bill to the North Carolina Association of Educators, a teacher's group repeatedly allied with Cooper and other Democrats.

"With teacher vaccinations in full swing, there is no legitimate excuse for Gov. Cooper and the far-left NCAE to oppose the broad reopening flexibility this bill grants to school districts," Sen. Deanna Ballard, R-Watauga, co-chair of the Senate Education committee, said in a statement. "The far-left NCAE owns the governor's mansion."

The state opened vaccinations to teachers on Wednesday, adding them to other categories already underway, including people ages 65 and up. It will be some time before all teachers are fully vaccinated, but top health officials have said schools can open safely before that's accomplished.

NCAE President Tamika Walker Kelly said in a statement that the bill "would have needlessly endangered the health and safety of educators and students."

"The best action all legislators can take right now is to encourage their communities to comply with the safety protocols and to encourage the vaccination of all school employees," Walker Kelly said.

Most systems already offer in-person instruction along the lines of what the bill requires. Durham Public Schools is a notable exception, and system leaders there decided this week to wait and see what Cooper did on the bill before finalizing a once-planned March 15 return to the classroom.

Before the bill came into play, Durham school leaders had decided to stay virtual for the rest of this school year.

Even if Cooper's veto is overturned, his move bought time for school systems and teachers worried about returning to the classroom. He used all but one of the 10 days the state constitution grants him to decide on a bill, and even if Republican leaders move as quickly as possible on an override and that override is successful, the process will take up much of next week.

The bill requires systems to hold in-person classes on the first weekday that comes 15 days after the bill becomes law.

Under the North Carolina constitution, it takes three-fifths of members present and voting in each chamber to override the governor's veto. How many votes that is depends on how many lawmakers are in the chamber when the vote is called, but assuming full attendance, that's 30 votes in the 50-member Senate.

Because the bill started in the Senate, that's where the first override attempt will come, moving to the House only if it's successful in the Senate.

Republicans will need to convince at least two Democrats to go with them to override Cooper's veto. If they do, it will be the first time he's been overturned since December 2018.

But Lowe said in a brief telephone conversation Friday evening that he'll back the governor, leaving Republicans a tight needle to thread. Clark said that it "would be prudent" for Republicans to make adjustments to the bill that the governor requested.

The bill passed the House 77-42, a more comfortable margin in a chamber of 120 members, where it takes 72 votes to override the governor, assuming perfect attendance. Eight House Democrats sided with their Republican colleagues on the bill, with a ninth absent during the final vote.

That math becomes important only if there's a successful override in the Senate.