The stay-at-home order went into effect March 30, forcing many businesses to close, restricting operations at others and limiting public gatherings to no more than 10 people. Cooper said the order, set to expire Friday, will be extended for another two weeks but will be modified to allow more commercial activities.

Cooper recently laid out a three-phase plan for reopening the state, but he said the timing and pace of that effort would depend on data that shows the virus is waning in North Carolina.

Dr. Mandy Cohen, secretary of the state Department of Health and Human Services, said most of those trends have been headed in the right direction over the past week or so, including a drop in the number of people reporting symptoms of COVID-19, the illness associated with the virus; expanded testing for the virus; a lower percentage of positive tests; and a flat trend of hospitalizations.

Is NC ready to reopen?

"We aren't seeing a significant downward trajectories on most metrics, largely because we were successful in the first place preventing a sharp peak," Cohen said.

Cooper said data supports his decision to sign an executive order moving the state into the first part of his three-phase plan. Under that order, which runs from 5 p.m. Friday to May 22, public gatherings would still be limited to 10 or fewer people.

"We have to be cautious and methodical with plans to ease restrictions," Cooper said. "Phase one in North Carolina is a careful and deliberate next step. We have flattened the curve, but we haven't eliminated COVID-19."

The new order would eliminate the distinction between "essential" businesses like grocery stores and pharmacies that have been allowed to operate under the stay-at-home order and "non-essential" businesses, such as clothing shops and bookstores, that had to close but could now resume operations.

Restaurants and bars would still be limited to drive-thru, takeout or delivery service under the new executive order. Salons, barbershops, gyms and other personal care businesses would remain closed, as would movie theaters, playgrounds and other sites for mass gathering.

Businesses that can reopen under phase one would have to follow social distancing guidelines to protect customers, such as limiting the number of people inside to 50 percent of capacity, routinely disinfect their stores and screen employees' health daily.

But employers are urged to continue letting their workers work from home as much as possible. 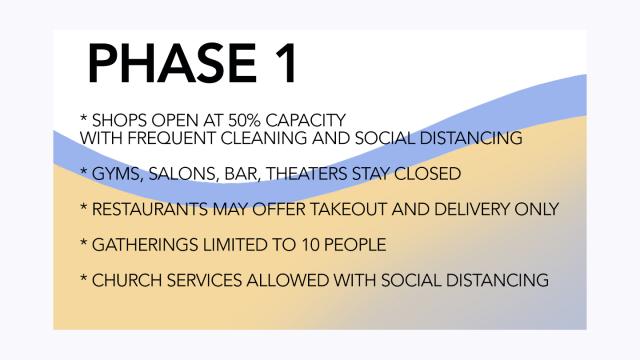 "I think people are ready to take care of each other and ready to get back to work," Salamido said, adding that safety "is their top priority."

The Chamber issued its own three-phase plan on Tuesday that accelerated those businesses into phase one from Cooper's phase two. The proposal also wouldn't limit capacity at restaurants, calling only for "social distancing" and protective equipment.

"We believe that restaurants know how to safely do that," Salamido. "That would be their decision and their option."

Under the governor's plan, outdoor church services could be held with more than 10 people if social distancing is followed. Parks and trails also will be reopened, and Cooper said summer day camps could be held if they follow guidelines issued by the Centers for Disease Control and Prevention.

"Today in North Carolina, over half of our counties comprise less than 10 percent of confirmed cases," Berger, R-Rockingham, said in a statement. "Why is a blanket, one-size-fits-all statewide order justified? I’m concerned that Gov. Cooper is ignoring more reasonable approaches and the experiences of the majority of states."

If virus-related metrics continue to trend in the right direction through May 22, Cooper said, the state could then move into phase two, which would allow restaurants, bars, fitness centers, salons and other personal care services to reopen if they follow social distancing and other safety protocols.

If the data shows a resurgence in coronavirus cases, however, North Carolina could remain in phase one for a longer period or even revert back to the strict rules now in effect, he said.

"We can only boost our economy when people have confidence in their safety," he said.