Raleigh, N.C. — Gov. Roy Cooper signed an executive order Monday to allow restaurants and bars to sell mixed drinks for takeout and delivery to limit the spread of coronavirus.

"This order will help people avoid settings that can contribute to increased viral spread while giving restaurants and bars a financial boost that they need right now,” Cooper said in a statement. “With cases and hospitalizations high around the country, let’s all do our part to slow the spread of COVID-19 while supporting local, small businesses safely."

The order directs the state Alcoholic Beverage Control Commission to waive any state regulations that would prevent people from obtaining a mixed drink in a sealed container as a takeout order or prevent employees and contractors, such as food delivery services, from transporting such alcoholic beverages in sealed containers to customers.

Another executive order requires restaurants and bars to halt sales of alcohol for on-site consumption at 9 p.m., and they and most other retail businesses must close by 10 p.m. under a nightly curfew. The idea is to discourage people from hanging out late into the night and possibly spreading the virus.

Restaurants can continue filling takeout and delivery orders after 10 p.m., however, and people are allowed to go out during the curfew to obtain food.

"[E]nabling the sale of mixed-beverages for off-premise consumption ... will provide an additional source of revenue for restaurants and bars in the state that may offset any reduction in sales that may be caused by the reduced occupancy limits and limited hours of operation for these establishments," Cooper writes in the new order.

"In light of the risks of transmission presented by the sustained, mask-less interactions inherent in indoor dining and drinking at restaurants, bars and similar establishments, encouraging delivery (and carry-out) as an alternative to indoor dining and drinking to the greatest extent possible can reduce the risk of viral spread," Tilson wrote in a letter to the Council of State.

The Council of State is made up of 10 statewide elected officials, led by the governor. The council hasn't concurred with many of Cooper's moves during the pandemic, especially orders shutting down large segments of the economy, but they did agree with the to-go drinks idea.

State health officials have pleaded with people in recent weeks to celebrate the holidays at home and avoid traveling or gathering with anyone outside their household as coronavirus infections and hospitalizations hit record levels in North Carolina.

"New Year’s Eve and the winter holidays are traditionally times when people frequent bars to drink in celebration," Cooper's order states. "[D]uring the pandemic, public health will benefit if it is easier for people to drink and celebrate at home, reducing the number of people coming together in bars, restaurants, hotels, private clubs and distilleries."

"This alone will not save restaurants and bars, but we think it’s an important part of the puzzle, just one more way we can try generate revenue and keep businesses sustained during the difficult winter months," Minges said. 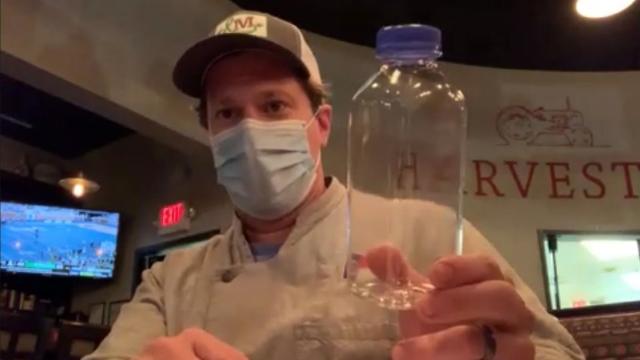 Jason Smith, the owner of 18 Restaurant Group in Raleigh, called the move "a great lifeline." Alcohol sales account for about one-third of his revenue, he said.

"Right now, it's all about small victories," he said. "There’s not going to be any home runs and grand slams in my industry to come. If I can just get one small victory and build on those, that’s been my goal during this whole thing."

But Lindsey Andrews, co-owner of Arcana Bar and Lounge in Durham, said to-go drinks won't help her. Her bar has been closed for months – she lacks the outdoor seating needed to operate under current restrictions – and she let her liquor licenses lapse until she could reopen.

"Restaurants that are already open, that had outdoor seating and robust cocktail programs, they're going to be able to add this on, and I think it’ll be helpful for them," Andrews said. "We’re glad for it in many ways in kind of the larger picture, but right now, it’s not really the lifeline we need. ... We need help at a larger level than a consumer-oriented program."

The to-go drinks plan is limited to one drink per person per order, and everybody participating in the order must be present to accept delivery. No orders can be taken or delivered after the time at which the restaurant or bar would normally cut off sales under local laws. Also, no orders are allowed to university campus residence halls or in communities where alcohol sales are prohibited.

The drinks wouldn't have to be part of a food takeout or delivery order.

Delivery drivers must be at least 21 years old and have to undergo training before being allowed to deliver to-go drinks. They will be responsible for verifying the identity and age of everyone receiving a drink and determining if anyone is too intoxicated to get a drink, according to the order, which is in effect through the end of January.

Rev. Mark Creech, executive director of the Christian Action League, criticized the plan, saying it would promote drinking problems at a stressful time for many.

"Whenever we create additional means for people to get alcohol, the science says dangerous consumption levels rise. Curbside cocktails create scenarios that make impaired driving and underage drinking more likely, despite the safeguards put in place," Creech said in a statement. "I don’t know of anyone involved in the science of alcohol policy that would agree with or endorse the governor’s executive order, even as a temporary arrangement."