By Monica Laliberte, WRAL executive producer/5 on Your Side reporter

Avon, N.C. — The company at the center of a 5 On Your Side investigation for not following through with promised refunds is now returning some customers' money.

It’s the latest development in what customers describe as a long and involved saga with Surf or Sound Realty on the Outer Banks.

Initially, the company said no refunds. 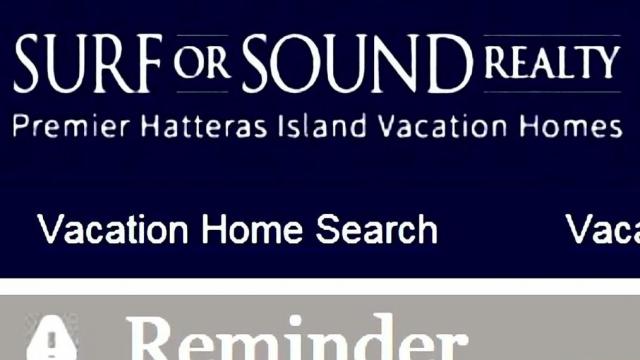 Then in March after 5 On Your Side questioned the policy, North Carolina’s Real Estate Commission issued an opinion saying refunds were due.

Surf or Sound responded, telling customers refunds were "in process."

Weeks later the company backtracked, emailing customers that they "…decided not to issue cash refunds…" instead, they offered "…credit toward another stay."

Surf or Sound is now sending customers a refund agreement that includes a "full release of all claims."

Customers 5 On Your Side talked with, including Sally McNamee, are wary.

"We’re cautiously optimistic that this could hopefully be the end of this whole ordeal," McNamee said.

5 On Your Side has repeatedly asked to talk with Petty about customer concerns.

On Friday, 5 On Your Side was referred to McGavock Edwards at the company’s recently-hired public relations firm.

"The refund agreement sent is in fact a legally binding document that assures all monies paid will be refunded," Edwards said.

As for customers who reluctantly re-booked fearing they would otherwise lose the money they paid, 5 On Your Side asked Edwards if they can now get refunds.

She said, "Surf or Sound’s intent has always been, and continues to be, to find a resolution for each and every individual."

During the weekend, she was refunded for one of three payments she made; the rest is pending.

McNamee hopes this time, Surf or Sound Realty will follow through.

"There’s not a whole lot of trust for Surf or Sound with the renters," she said."

McNamee says she probably will sign the document. "I just want this to be over. All along, I’ve just wanted my money back."

The Attorney General’s Office emailed 5 On Your Side saying they’re pleased the case didn’t end up in a lengthy court battle, adding the refunds are "the right outcome.”

A spokeswoman added the "…office will stay in touch to ensure the issue is resolved."

As for the Attorney General’s investigation, Edwards told 5 On Your Side that Surf or Sound provided what was asked for "… and are encouraged now that we are providing refunds that there’ll be a reasonable resolution."