Cary, N.C. — Police were called to a coronavirus test site in Cary Saturday morning after demand outstripped availability. About 70 cars were in line on Medcon Court at Kildare Farm Road, and only two staffers were in evidence.

An EMS station next door was blocked by the line of cars waiting for drive-thru tests.

While Wake Toxicology Laboratory, at 907 Kildaire Farm Road, advertised drive-thru and walk-up tests available through 4 p.m. Saturday, those on site told WRAL News they expected to run out of tests by noon.

Leah Martin was among those who got out of their vehicles.

“I am directing traffic because they definitely need some help," she said.

Others were yelling at the testers, WRAL's Kat Campbell, who was in line, said.

Test sites across Wake County are booking up quickly as the Thanksgiving holiday approaches.

Martin joined the crowd because her daughter had a possible exposure at school.

“Thanksgiving is coming up, and they want to make sure that they are not COVID-positive for Thanksgiving," she said.

Police officers advised some in the back of the line to try another site.

County officials tell WRAL News demand skyrocketed 71% this week as people seek to follow expert recommendations to get tested before celebrating with people outside immediate family.

If you need to get tested, make an appointment online to avoid wait times. If you don't live in Wake County, the North Carolina Department of Health and Human Services has a list of free testing sites across the state.

NCDHHS recommends calling ahead to testing sites to ask about capacity before going.

By Saturday morning, all appointments through Tuesday were booked for drive-through testing at the Sunnybrook parking deck in east Raleigh.

Wake County officials say the Sunnybrook site did 7,153 tests in October, and 4,979 already in November. Just in the past two days, it's risen from an average 350 tests a day to 500.

At the Radeus Labs site in Wake Forest, the increase in the past two days has been even steeper, from an average of 1,000 tests a day to 2,000.

By Saturday afternoon, Radeus had remaining appointments for testing on Wednesday. Those who test Wednesday "would be lucky" to get results back in time to change their Thanksgiving plans, a spokesman said.

Both Wake County sites will be closed on Thanksgiving. .

Nearly 4,500 tests have been taken in Wake County this month. The county said the average wait time for test results at Sunnybrook is 24 to 48 hours, although most get results within 24 hours.

In Wake Forest, most people are receiving their results in 12 to 24 hours. LabCorp reports it's processing tests around the clock, completing about 200,000 tests per day across the country.

People who should be tested include those who:

On Sunday, a sign was posted outside of the same testing site indicating the station was out of test kits due to high demand. 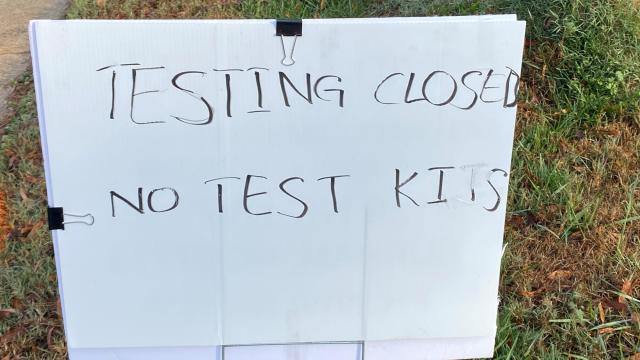