Carrboro and its people think outside the box 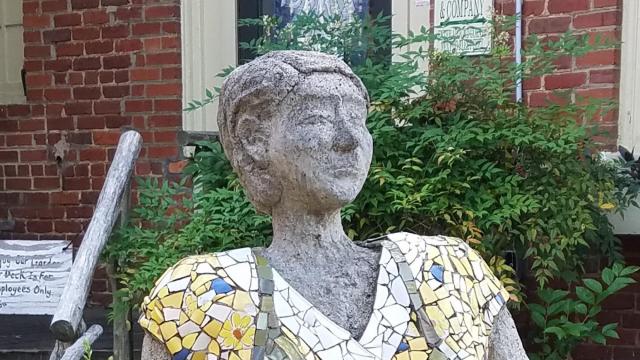 In the past few months, communities across the country have been forced to innovate and transform. Restaurants and shops had to shut down and have now reopened to various capacities, events were canceled and postponed, and normal life seems like a dream from long ago.

While life in Carrboro has certainly changed, the community was never quite accustomed to a "run-of-the-mill normal" anyway. Driven by an intense passion for all things local, the tight-knit, densely packed little town has used the pandemic to flex their local love and their creative innovation.

Ask anyone from Carrrboro how the community has thought outside of the box over the past few months and one of the first things they'll likely mention is the Carrboro United Food Hub. Within one week of the closure of local restaurants being announced in March 2020, several business owners from Carrboro came together to create a way for the community to continue enjoying the restaurants they love — and help keep them afloat in the process.

"The idea was for us to create a platform where people who were concerned about the coronavirus could go pick up a meal with strict protocols around how it's taken care of, then be met by our staff who greets them, gets their name, and puts their order in the back of their car for them. We're trying to create this lifeline between guests and the restaurants themselves," said Kevin Callaghan, owner of Acme, a restaurant in Carrboro that's been an integral piece of the food hub. Acme recently expanded its outdoor space to accommodate more guests.

"We're also just encouraging people to understand that we as a community are all the stakeholders of small businesses," Callaghan continued. "It's like a hurricane that comes through and only targets certain houses, you know? And I think that Carrboro United has done a good job of highlighting that there are these businesses affected, but they're still open, and they still want your business."

While impacts of the pandemic and subsequent shutdown have been felt strongly in the service industry, its ripples have been felt all across the community at large. For Carrboro's Mayor Lydia Lavelle, that's meant finding ways to harness the community's creative side along with its passion for supporting local.

Luckily, the foundation was already there.

"This pandemic has certainly tested the spirit of a community and our goals and values. At once, we are really little and really big — we're only 6.4 square miles, but now we're 21,000 people," Lavelle said. "Before the pandemic though, we had a lot going for us in terms of community spirit and values. Managing since then has been a massive community effort, but I've been proud of our community and how we've risen to the challenge."

When the pandemic started, Lavelle kicked things off almost immediately with a virtual council meeting, discussing and approving a loan plan for local businesses and restaurants in need — during a critical window of time when federal aid was still in the works. Now, several months into the pandemic, Lavelle recognizes the need to keep the community strong while also staying as safe as possible. Carrboro's unique spirit helps make that possible.

"When it comes to responses, the food hub is one of the greatest examples of our community spirit. It's inclusive not just of Carrboro but even restaurants outside of Carrboro, and it's also expanded a little bit beyond just food," Lavelle said. "We've always had a 'buy local, support local' mindset long before the pandemic. A lot of our local businesses had to totally rethink their operations, from redesigning websites to ordering the right utensils. I'm a member of a couple social media groups that offer daily recommendations on places to go, and the community is doing a great job supporting the efforts of local restaurants. We want them to stay open, and we want them to stay in Carrboro."

At Acme, for example, Callaghan has taken to crowd sourcing suggestions. Callaghan looked outside of the restaurant industry to hear from customers, recognizing the pandemic has forced people to make all kinds of sacrifices, and wondering what he could do to help lift spirits. When he sent out a question asking what people missed most, the overwhelming response was much-anticipated trips and vacations that were forced to be canceled.

In keeping with the unique Carrboro spirit, Callaghan and his team at Acme found an innovative way to solve the problem.

"We started this weekly staycation event where we do a themed staycation dinner every weekend. You can get a five-course meal — for example, we're featuring Maine, and we'll have clam chowder, you'll get two fresh poached lobsters, corn on the cob, blueberry cobbler, all those sorts of things, all available for pickup. We've also done Thailand, France, Spain, Italy, California, Japan — a little bit of everything," Callaghan said. "People still want to be a part of the community, and I think that's the part that's the most invigorating on many levels. The community is still there, and it's vital. It's not their job, but they still want to help."

In addition to help on the local level, Carrboro officials like Lavelle have also been coordinating with surrounding towns and counties in order to provide a unified response to the crisis. In some cases, they've taken more serious precautions than those on the state level, such as closing bars at 10 p.m. and only allowing six people at tables as opposed to the state-suggested 10.

Not only has Carrboro gone above and beyond to keep people safe, but it's also made sure to keep local business afloat as much as possible. For restaurants like Acme, the response from both the city and the community has been overwhelmingly positive.

"Any independent restaurant that's successful is a neighborhood restaurant. I mean, what makes restaurants succeed? It's the people who live here, who support you and come out week after week, and they've been very supportive all along," Callaghan said. "Through mistakes and good times and bad, we've had people show up, and we consider it mutual. The community helps us, but we also have a responsibility to take care of the community. It's one of the reasons why we didn't shut down — we turn on our lights, and maybe we're just gonna serve hamburgers and fried chicken, but we'll be there."

Aside from the restaurant hub, the community has found other ways to show support and maintain normalcy. Since Carrboro is surrounded by walking trails and parks, many residents use their free time or lunch breaks at home to get outside and say a socially distanced hello to their neighbors.

For Lavelle, one of the major sources of comfort during the pandemic has been regular visits to the farmer's markets. While other towns around Carrboro shut their markets down, the Carrboro community found unique ways to enact safety measures that kept their market up and running.

"There were a lot of communities who said no farmer's markets, but we worked immediately with our Carrboro Farmers Market. This is one of the longest running in the Southeast United States. We wanted to work on how we could also make it the safest market around, and we were really up for the challenge — we didn't miss a beat," said Lavelle. "They worked with us on expanding the market so that it flows over into a couple of our parking lots. They have one-way traffic, there's hand sanitizer everywhere, and the mask compliance from day one has been almost 100 percent."

Lavelle, who visits the market often herself, has been impressed with how visitors and residents have taken the rules seriously, staying socially distant and avoiding congregating around the area. Additionally, vendors have taken to using Venmo to reduce contact during payment, as well as packing fruits and vegetables so people don't touch them.

In keeping the market running as safely as possible, Carrboro not only shows it's unique commitment to the community, but also helps local farms and farmers sustain their livelihood through a difficult economic time for most.

From the mayor to restaurant owners to individual community members, those who call Carrboro home are dedicated to innovating wherever they can to keep the community thriving and afloat during difficult times. While things may not return to normal for a while, Carrboro is more than ready for the challenge.

"It's not like a U-turn, where we're going to turn around and become the restaurant that we were before all this. We're wandering down a different path, and we're going to have to keep our eyes open," said Callaghan. "The main takeaway for me is remembering that the community is the stakeholder — they're what holds restaurants together and have helped us realize that we're not in this alone."