Dozens of law enforcement officers were also downtown, anticipating a large protest after recent ReOpenNC rallies. Legal gun owners were allowed to carry their weapons while they walked as long as they stayed off the State Capitol grounds.

Some of the protestors were from American Revolution 2.0, part of a national movement to reopen states amid the pandemic. The group had planned 52 protests across the country on Friday, according to its website.

“It’s a giant party. Let’s get together. Let’s have a good time. Let’s celebrate America," Josh Ellis, who founded the grassroots group on April 8, said Thursday. “This is unconstitutional. It should never have happened and it should never happen again.”

"I really am only here for one reason and that is to be with like people that believe in civil rights," said Lisa Molgren, a nurse from Pinehurst and a member of American Revolution 2.0.

"The rights that I want are not to be told when I can work, if I can work, what companies should be closed and why they’re being closed," Molgren said. "Everything is changing in front of our eyes, and it seems that people have sort of decided that stay at home means do nothing, and I think it’s time we do something." 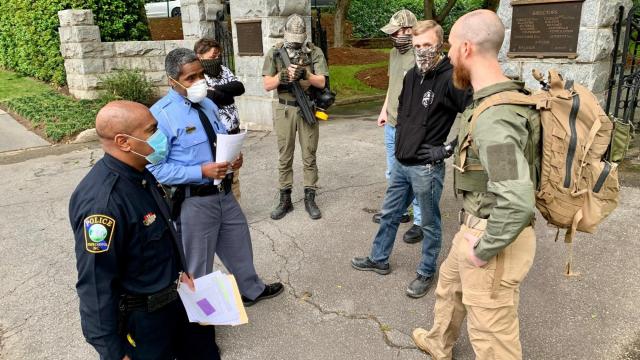 Officers were downtown before 8 a.m. on Friday as another group gathered outside Oakwood Cemetery wearing camouflage and carrying guns.

The group is part of an anti-government movement that feels their First Amendment rights are being violated by business closures and stay-at-home orders. The Southern Poverty Law Center refers to them loosely as a patriot group.

"We should not be sheltering in place everybody that’s healthy. That’s not the way it works," said Randall Moore. 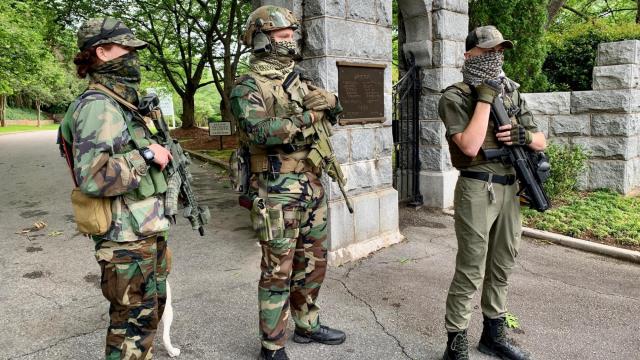 “I just hope the people wake up. They are really trying to trample on our rights," protester Stephen Wagner said. "This is just the first line in a very thick book of tyranny that they have planned to perpetrate on the American people, and we see them coming."

Another protester, who declined to give his name, called the stay-at-home orders government overreach.

"Nowhere in the Constitution does it say that you have inalienable rights unless people get sick," he said. "Because there’s a tragedy you can advise people to stay home, but you don’t just suddenly have powers as a government official that you did not have before."

He said he and his fellow protesters were carrying guns in self-defense.

"We are armed as sort of a deterrence. We’re not here to start violence by any means," he said.

The morning group remained small – fewer than 20 people – but got into an argument with an Oakwood resident who approached them and asked that they show their faces and put away their guns.

"If you're really my neighbors, then in a less confrontational, less hostile setting, let's have a reasonable conversation about this," he said.

The protests were nothing like the ReOpenNC rallies, which have attracted hundreds of people in recent weeks, demanding that Gov. Roy Cooper lift his stay-at-home order, which remains in effect until at least May 8, and allow businesses that have been shuttered during the pandemic to reopen. 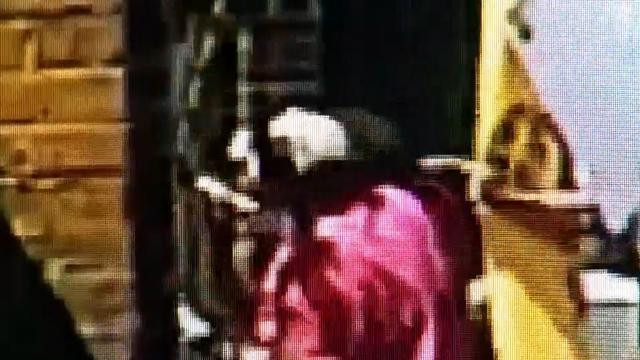 Four people were arrested at Tuesday's rally, including one of the co-founders of ReOpenNC, after they ignored orders by police to stay off a closed sidewalk near the Executive Mansion.

Before officers closed down the perimeter of the governor's mansion, police said, Jonathan Warren damaged a mechanical gate to the grounds. The four protesters were charged with violating an executive order and resisting arrest. Warren is also charged with damaging property.

WRAL News obtained video on Thursday that shows a man aggressively pulling on the gate and then walking away.

One of ReOpenNC's leaders splits with group, accuses others of 'nearly inciting a riot'

"We are insisting things don't get crazy like that," said Ellis, when asked about American Revolution 2.0's protest in Raleigh.

Ellis said American Revolution 2.0 had a presence at the Michigan Capitol in Lansing on Thursday. Hundreds of protests, some carrying guns, voiced their opposition to the state's emergency order.

"That is definitely not something we advocated for," said Ellis. "We've told people to follow the law and stay peaceful."

Ellis, who lives in the suburbs of Chicago, said he expects tens of thousands of people to show up nationwide. Protesters are "highly encouraged" to wear face masks and keep 6 feet of distance, he said.

He said he believes the government’s role should be to educate people, make recommendations and not to restrict businesses from operating or people from gathering.

When asked if he was concerned about the spread of the virus if states opened too early, Ellis said, “That says I am not responsible for my own health. That’s the message when you are saying only government can protect you from this. You are saying you are either incapable or too stupid to take care of your own health.”

Ellis said he hopes strength in numbers sends a clear message from the White House to statehouses across the country.

“We need to stand up as one giant nation. … We are not asking for permission anymore. You work for us. You don’t rule us,” he said.