After 11 days in hospital with COVID-19, self-described 'tough guy' warns others not to take virus lightly

Raleigh, N.C. — Stanley McHenry, who describes himself as a "tough guy," was a Durham police officer for 31 years before a dangerous brush with COVID-19.

"It (the job) prepares you for just about everything that might come along, although I don’t know if I was completely prepared for this," said McHenry.

The 66-year-old said he routinely takes three-to-four mile walks with his wife. They wear masks in public, maintain social distancing as much as possible and practice regular hand hygiene. He is not certain where he was exposed to the virus. 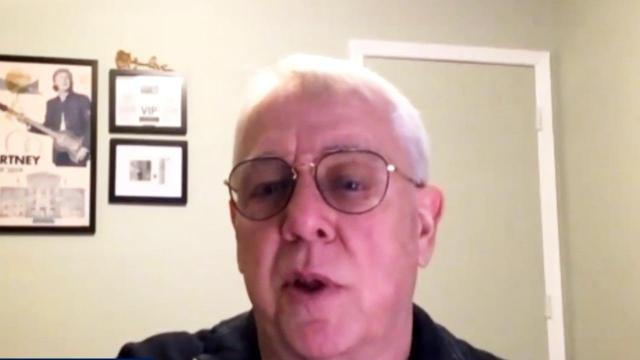 It was the week before Christmas when early symptoms of a runny nose and slight fatigue appeared, so McHenry got tested for COVID-19.

A day or two later he learned he tested positive.

Brain fog and confusion set in. Soon after, he collapsed at home.

After four days in the hospital, McHenry remembers waking up. He panicked, pulling out his IV line and monitoring devices.

"I literally had no idea why I was there," he said.

'He was like my Superman': Former Raleigh police officer among NC's COVID-19 casualties

Once McHenry understood his condition, he had difficulty adjusting. He described it was "almost like a sense of depression because nobody can visit you there."

After showing progress, McHenry was released from the hospital on Jan. 5 only to return six days later after a another lung infection. Altogether, he said, he spent 11 days at Duke Raleigh Hospital.

While there, he took part in a trial for Remdesivir.

According to Youseff, as is the case with blind-trials, McHenry may or may not have received the drug that can help fight infection and provide temporary immunity.

Requirements of the trial meant McHenry had to wait 90 days before getting longer term protection with a vaccine.

"So on March 31, I will be somewhere having some medical professional sticking a needle in my arm. That’s my plan," he said.

"Nobody should think they should fight it (COVID-19) on their own," said Youseff. "It’s a disease that is severe. Everyone should seek help when they experience symptoms or at least get diagnosed."

According to Youseff, people who have no drop in their oxygen levels will be offered guidance by medical professionals and can quarantine at home.

If more serious symptoms appear, like diarrhea, loss of appetite, fatigue, and especially if a fever is detected, she advises people not to wait for the condition to grow worse. Seek medical care right away.