A Reorientation during the Pandemic 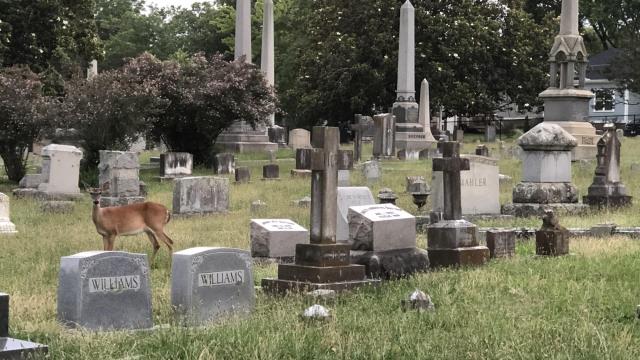 Recently, while walking a familiar loop in a cemetery near my house, I looked up to lock eyes with a doe grazing among the headstones. This cemetery, established in 1869 in downtown Raleigh, has a five foot chain link fence running its entire periphery. The only access point is a pipe that follows the creek bed and clearly was how this female deer had wandered in.

Though I walk alone there often, especially since the world as we know it stopped four months ago, I am often lost in thought, with eyes cast just a few feet in from of my feet. I often head out on a walk or bike ride in response to news like that announced in yesterday’s press conference: in response to the increasing coronavirus cases, there would be a second three-week extension of Phase 2. After waiting four months for the reopening North Carolina, there would be another necessary postponement with more challenging repercussions.

At 53 and the quiet born of quarantine, I have become more familiar with my instinctual response to big and small things I cannot control. I have learned that rumination alone is not a healthy response, that a healthier response is to lace up my shoes and head out on a walk or bike ride. To get out of my head and into my body.

In a recent interview, writer Annie Lamott spoke about the moment when her teenage son told her she was going to be a grandmother.

What goes through one’s mind at such news?

It’s not hard to imagine.

However, in Lamott’s case, rather than stay in her head, she invited the girlfriend and their new baby to move in. Long story short: years later, while playing with her grandson, Lamott reveled in the joy that arose from a situation she would never, ever have chosen.

Back to noticing the deer. On walks and bike rides, solitary or not, I’ve begun having more unexpected encounters: a copperhead one day and a woodchuck the next sunning itself on the Neuse River Trail, a field of sunflowers and zinnias on the Walnut Creek Trail. Two weeks ago, a barred owl’s talons grazed my bike helmut, when I came around a curve quickly. I don’t know who was more surprised.

I suppose what I do know is that we—all of us--are on this journey in the middle of a global pandemic that none of us would ever have chosen. Would a reorientation be helpful?