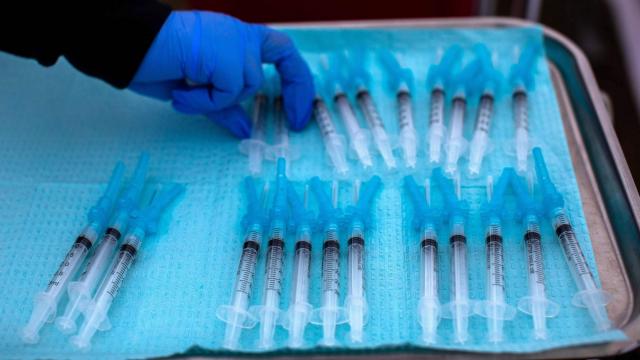 CNN — The United States is seeing a large decline in new COVID-19 cases -- but there's a major caveat.

According to a CNN analysis of data from Johns Hopkins University, the US is seeing a 29% decline in new COVID-19 cases compared to this time last week, the steepest one-week decline the US has seen during the pandemic.

Real improvements have been made, but it's unclear exactly how much of the decline can be attributed to the winter weather that's gripped much of the country, forcing officials to close testing sites, which affects the collection of crucial data.

Several states impacted by winter storms are seeing large declines in new cases this week, per Johns Hopkins data, including Texas, where cases are down 56% compared to last week.

The COVID Tracking Project said Thursday it had been unable to update the daily number of tests performed in Texas for four days because of the winter weather. Overall, the US has seen nearly a 13.5% decrease in testing compared to this time last week.

The N.C. Department of Health and Human Services started releasing the total number of patients tested for COVID-19 on March 18. DHHS doesn't publish raw numbers detailing daily negative and positive tests from labs reporting both of these figures - just percentages. So WRAL is calculating the percentage of positive tests here on a rolling average based on the last seven days of reported new cases divided by the number of reported new tests. NOTE: Positivity calculations, new tests and cumulative tests in this chart now include tests identified through antigen testing, which DHHS began reporting on its dashboard on Sept. 25. Read more about the corrections and compare the changes here.

Again, that's not to say the United States hasn't made progress in driving down case numbers. Early this week, Dr. Ashish Jha, dean of the Brown University School of Public Health, and Dr. Jonathan Reiner, professor of medicine and surgery at George Washington University, both pointed to increased mask-wearing as one reason for declining numbers.

Whatever progress has been made, however, is also threatened by the rise of COVID-19 variants, some of which appear to be more transmissible. And while they could spell trouble, pharmaceutical companies and scientists are confident vaccines will evolve with them, according to senior White House adviser Andy Slavitt.

'Racing ahead of the variant'

"I spoke to all the pharmaceutical companies and scientists, and they all say the same thing: Even if these vaccines diminish a little bit, they will be able to continually update them," Slavitt, who is responsible for the COVID-19 response, told CNN's Chris Cuomo Thursday.

With more than 1,500 cases of worrisome variants reported in the US, officials have been racing to administer vaccines quickly to get ahead of further mutations, with about 57.7 million doses administered so far across the country, according to the US Centers for Disease Control and Prevention.

"Even though the numbers look promising in terms of new cases going down, that's misleading," said Dr. Peter Hotez, dean of tropical medicine at Baylor College in Houston, pointing to the UK COVID-19 variant. "I think we're about to get hit very hard, so we have to race ahead of the variant."

The N.C. Department of Health and Human Services updates the number of cumulative lab-confirmed COVID-19 cases and deaths daily at around noon. This chart shows the cumulative count of cases. NOTE: This chart now includes cases and deaths identified through antigen testing, which DHHS began reporting on its dashboard on Sept. 25. Read more about the corrections and compare the changes here.

New research out of Israel and Canada has found that only a single dose of the Pfizer/BioNTech's vaccine offers significant protection against the virus, but Slavitt stressed that does not mean people should skip the second dose.

US will have to work 'double time' after winter weather

So far, more than 41 million people have received at least one dose of the vaccine, and more than 16 million have received two doses, CDC data shows. But that means just 4.9% of the US population has been fully vaccinated.

Vaccination delays caused by harsh winter weather gripping much of the US means the country will have to work "double time" to get back on track, according to Dr. Anthony Fauci, who told MSNBC Thursday that some places have seen the vaccine rollout slow "to a grinding halt."

A number of states have reported delays in vaccine deliveries, forcing providers to cancel or reschedule appointments for vaccinations.

The Federal Emergency Management Agency (FEMA) on Thursday said more than 2,000 vaccine sites were located in areas suffering from power outages. And when a site is closed, Slavitt said, officials don't want to ship a vaccine there.

Vaccines delayed by rain, but people won't have to wait for long

"If an administration site is closed, we don't want to ship a vaccine, because as you know, they can't sit for more than 72 hours," Slavitt told CNN. In the meantime, he said, vaccines will be kept "safe and sound."

Fortunately, none of the vaccines that need to be stored at specific temperatures have been spoiled this week to officials' knowledge, he said, and everyone is working to ensure vaccines get into people's arms and if there are backlogs, that the vaccines are properly stored.

Hotez with Baylor believes the vaccine effort has been set back by about a week, he told CNN Friday.

"We've delivered about 40 million immunizations to Americans, but we have to get to half a billion," he said, when taking into account the population of the US and the fact experts believe we need about 80% of the country vaccinated to reach herd immunity. "So we're less than 10% of the way there."

Black and Hispanic people are getting fewer vaccinations

While Tedros' declaration will focus on vulnerable groups and small island states with less bargaining power than larger countries, inequity has already been a factor in the US.

In most of those states, Black and Hispanic people have received a smaller share of vaccinations compared to their share of cases, deaths and percentage of the population, the researchers noted. The opposite is true for White people in most states.

In Texas, for example, Hispanic people account for 42% of coronavirus cases, 47% of Covid-19 deaths and 40% of the state's population -- but they have gotten just 20% of vaccinations.

Among 27 states that report ethnicity data for those who have received at least one dose of the vaccine, White people have been vaccinated at a rate three times higher than Hispanic people and twice as high as Black people.

The KFF team noted that some states don't record the race or ethnicity of those vaccinated.

Researchers of a study released Tuesday suggested that pregnant women should be prioritized for vaccination after they found that the COVID-19 infection rate among expectant women in Washington state was 70% higher than in adults of similar age in the state.

The higher infection rates "may be due to the over-representation of women in many professions and industries considered essential during the COVID-19 pandemic — including healthcare, education, service sectors," lead author Dr. Erica Lokken said in a news release.

"Pregnant women are written out of the allocation prioritization in about half of U.S. States. Many states are not even linking their COVID-19 vaccine allocation plans with the high-risk medical conditions listed by the [Centers for Disease Control and Prevention] —which include pregnancy," Waldorf said.

A Pfizer/BioNTech vaccine trial for pregnant women gave their first participants doses on Thursday. The doses were administered to US participants, though the trial will be conducted in nine countries: the United States, Canada, Argentina, Brazil, Chile, Mozambique, South Africa, UK and Spain.

The company said the trial is designed to evaluate the vaccine in pregnant women, but also their infants, who will be monitored for safety and for the transfer of potentially protective antibodies until they're about 6 months old.

Pfizer/BioNTech also expects to expand trials to children ages 5 to 11 in the next couple of months, according to a company news release.