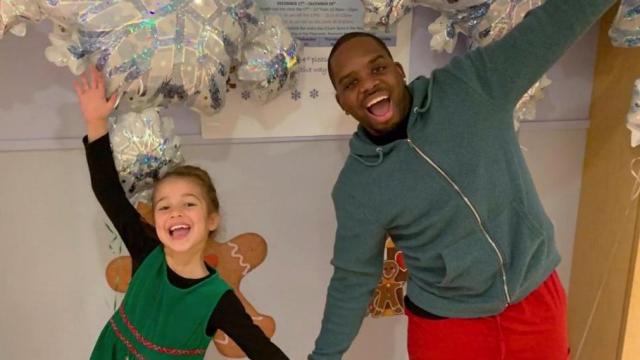 Holly Springs, N.C. — Well before the coronavirus outbreak, a 6-year-old girl in Holly Springs often had to wear face coverings and gloves in public.

Lakelynn Markham has a rare form of cancer that requires monthly treatments in Boston. Unfortunately, those trips have been suspended because of the pandemic.

While many local families are adjusting to the 'new normal,' this local family already had to adjust to a new normal years ago.

Now, Lakelynn has to fight for her life without regular hugs from her beloved Nonna or playtime with her cousins and friends. Worse yet, she has lost her hero – a nurse named Shawn.

The superhero nurse who helps Lakelynn fight against cancer

Shawn is a hero who helps Lakelynn battle cancer using his 'magic.'

"He has magic," explained Lakelynn. When her hero does her IV, his magical hands make sure the needle doesn't hurt at all.

Shawn does his heroics at the Jimmy Fund Clinic, part of the Dana-Farber Cancer Institute in Boston.

"That's her second home," said Leslie Markham, her mother. For three years– half of Lakelynn Markham's life –she and her parents have flown there every month to participate in a clinical trial.

For kids like Lakelynn who are living through medical trauma, routine is important: Knowing what to expect, where they will stay, who their doctors and nurses will be. Any change to their routine could reawaken fear and anxiety in the child.

If only Lakelynn's superhero friend could make her family magically appear in Boston during this COVID-19 crisis.

The fear, and the pain, first hit the Markham family in late 2016.

"She kept telling me she had a boo-boo in her arm," said her mom.

Markham said her daughter's right arm was hurting terribly, causing her to stay up crying at night.

Doctors found a mass in her arm. It was cancerous: A rare sarcoma in a bundle of nerves that sends signals from the spinal cord to the arm.

"Lakelynn's cancer is so rare, we could have been treating her with standard chemo, and it wouldn't have done anything," said Markham.

And surgery would have damaged critical nerves.

She qualified for a clinical trial with help from Alex's Lemonade Stand Foundation, which raises funds for childhood cancer research.

However, with trips to Boston canceled, Lakelynn's treatment has been taken over by doctors and nurses at Duke. Her treatment arrives through an overnight courier.

Lakelynn's hero Shawn isn't at Duke, but he sent his magic to the nurses there. It appears along with Lakelynn's treatments, even nurse Shawn's magic has been couriered to Duke.

A plea for people to take COVID-19 spread seriously

Lakelynn does get outside for exercise and sunshine. She rides her bike.

It really bothers her mom when she sees people pass by without wearing face coverings.

She pleads with people: Think of the Shawns and the Lakelynns of the world, who are at risk each day, battling to help others or battling to survive.

"To not be cautious for them, whether you believe in it or not, I take it personally," said Markham.

Now if only Lakelynn could just play with her cousins again and hug her Nonna, that would really be magical.

The Markham family hopes to return to Boston in June to continue Lakelynn's treatments.

For now, they're just so grateful for the doctors and nurses at Duke.