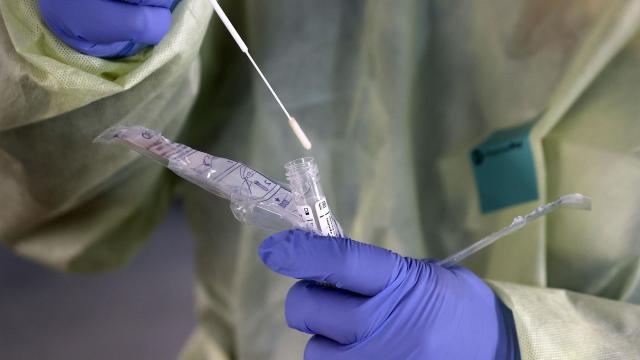 CNN — A New Jersey woman and three of her children died from coronavirus, and two other relatives are in critical condition, a family member said.

Another relative has the virus and is in stable condition, and 19 other family members have been tested, Roseann Paradiso Fodera, a cousin of the mother, told CNN.

Grace Fusco, 73, died after being diagnosed.

A son, Carmine, and daughter Rita, in her mid-50s, died earlier. Another son, Vincent Fusco Jr., died Thursday, Paradiso Fodera said. He was in his early 50s.

"This is an unbearable tragedy for the family," Paradiso Fodera told CNN.

"The family's biggest concern is that we have four members of one family who have passed, two on life support and one stable," Paradiso Fodera said. The 19 awaiting their test results "are anxious that their relatives have passed and they don't know if they are infected or not."

Testing for the family members was performed Saturday.

The 19 include "children, parents and grandchildren in this family," she said. They are in quarantine.

Fusco died unaware of the earlier deaths of her oldest son and daughter from Covid-19, the disease caused by coronavirus, according to The New York Times, which first reported the story.

The infections appeared to have originated from a family dinner this month, The Times reported.

All hospitalized family members were at a medical center in New Jersey except Carmine, who was in Pennsylvania when he died, Paradiso Fodera said.

The US death toll has grown to 193 people, and states are ordering more shutdowns. As of Thursday evening, New Jersey had nine deaths from the virus and at least 742 people infected.

The number of coronavirus cases in the United States has jumped daily, pushing health care officials and political leaders to take steps to keep the pandemic from overwhelming the system.

"We're talking about potentially 12 or 18 months of this," said Dr. Michael Osterholm, director of the Center for Infectious Disease Research and Policy at the University of Minnesota.

Two major factors are fueling this pandemic: people with no symptoms easily spreading the virus and problems with testing in the United States.

Experts are urging everyone -- even those who don't feel sick -- to stay at least 6 feet away from others and avoid social gatherings.