Here are the African countries with confirmed coronavirus cases 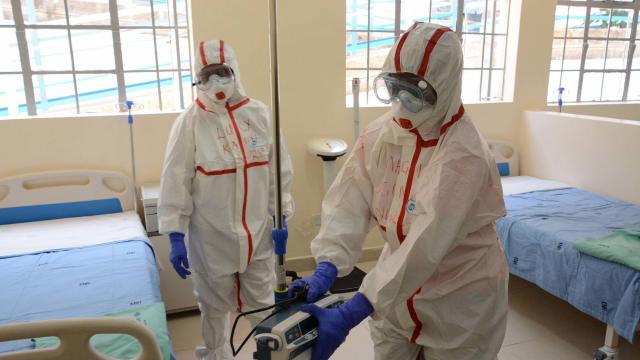 CNN — There are now more than 100 cases recorded in 11 countries in Africa, according to figures from the World Health Organization.

Egypt remains the nation with the most reported cases with 59, more than half of all confirmed cases on the continent.

The countries with reported cases as of Wednesday, according to the World Health Organization, include the following:

South Africa on Wednesday released a statement saying it had recorded six new cases of the virus, bringing the total number of cases there to 13.

Most of the cases in Egypt are among passengers and crew members aboard a Nile cruise ship coming from southern Egyptian city of Aswan to Luxor, Egypt state-run Ahram Online reported. Egypt's health ministry announced Sunday that a German citizen was the first death from the virus in the country, according to Ahram Online.

Morocco on Tuesday confirmed its first fatality due to coronavirus, according to local media reports. An 89-year-old woman who had other health complications died from the virus, the health ministry said.

In West Africa, Burkina Faso reported two cases of coronavirus, the WHO said Tuesday. The patients are a couple, one of whom recently returned from France, where health authorities are battling to control the spread of the virus, according to the WHO. The pair are under quarantine in the country.

Burkina Faso is the sixth country in sub-Saharan Africa to report positive cases of the virus. The Democratic Republic of Congo reported its first patient Tuesday, a citizen who had just returned to Kinshasa from France, the WHO Regional Office for Africa tweeted.

In South Africa, Health Minister Dr. Zwelini Mkhize said 3,642 tests have been conducted. The 13 infections all involve people who had recently traveled overseas, including a group of 10 people who returned from vacation in northern Italy in early March, the minister said.

In Nigeria, a second patient was confirmed earlier in the week. The person became ill after coming into contact with an Italian citizen who had traveled to Africa's most populous country last month, according to the country's health ministry.

The 44-year-old Italian man visited two states before he was diagnosed with the virus in late February. He remains in isolation in a stable condition, officials said.

Health officials have been working against the clock to trace all those who came into contact with the Italian man. Those that have been traced will remain in isolation while tests are conducted, the country's National Centre for Disease Control (NCDC) said.

Health officials told CNN that Nigeria's experience with Ebola has prepared the country for outbreaks like coronavirus.

NCDC director Chikwe Ihekweazu pointed to the speed with which Nigeria identified and confined the patient as a sign the country is prepared to deal with the outbreak.

"The system worked. We identified this case, diagnosed and isolated within 48 hours of it entering the country," Ihekweazu said. In other countries like Iran and Italy for instance, by the time the first case had been confined, there was widespread contact."

As coronavirus spreads across the globe, countries in Africa are taking preventive measures to keep the disease out.

Although there are no confirmed cases of coronavirus in Rwanda, citizens are being encouraged to maintain good hygiene. A video posted by The New Times Rwanda on Twitter shows commuters washing their hands at taps installed at a bus station in Kigali, Rwanda.

In Lagos, temperature screenings and use of hand sanitizers before entering public spaces such as banks, offices and restaurants are becoming compulsory to limit the spread of the disease. Signs informing the public on the best practices to avoid contracting coronavirus can be seen in parts of the city.

Scores of health workers have been deployed at international airports in Nigeria to screen all arriving passengers.

The outbreak has prompted air travel restrictions and cancelations of high-level conferences across the continent.

Uganda has banned visitors traveling from seven countries it said were "highly hit" by the virus on Monday. The affected countries are China, France, Germany, Iran, Italy, South Korea and Spain.

"Government has decided to ask travelers from the affected countries not to come to Uganda because the high cases they are reporting can easily be imported into the country," the country's health minister Jane Ruth Aceng said in a statement on Monday.

Aceng said those who insist on visiting the East Africa nation from these countries would have to self-isolate at their own cost for 14 days either in their home or at a government facility. Ugandans in affected countries are not exempted from the travel ban.

Uganda also postponed the 2020 United Nations G77 and China Summit scheduled for mid-April in the Ugandan capital of Kampala due to the coronavirus threat, the minister said. More than 6,000 delegates from 136 member states were expected to attend.

Rwanda Air, Kenya Airways and Morocco's Royal Air Maroc are among some African airlines that have suspended flights to China. Ethiopia Airlines, however, tweeted that it will keep operating flights to China while adhering to international standards to ensure the safety of their passengers.