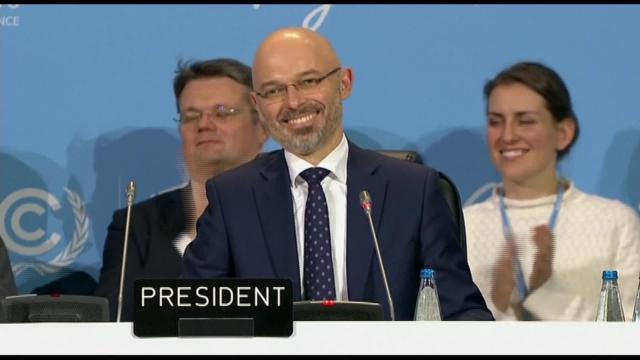 (CNN) — After two weeks of discordant and emotional negotiations, the nations of the world agreed Saturday night on a set of rules meant to help curb global warming.

But scientists and even the negotiators themselves know the so-called "Paris Rulebook" won't be enough on its own to stop carbon pollution from reaching critical levels.

Countries would have to do far more to curb fossil fuel use and deforestation to avoid the droughts, superstorms, deadly heat waves and coastal floods associated with global warming.

This rulebook is supposed to put into motion the Paris Agreement on climate change, a landmark 2015 accord that the US Trump administration has promised to abandon.

After fraught and much-delayed talks at the COP24 climate change conference here in Polish coal country, more than 190 countries agreed to the rules. They punted, however, on a critical but complicated issue involving how countries trade and account for certain pollution. Brazil nearly blocked the process amid concerns that its proposals would lead to "double counting" and, essentially, cheating, according to observers and a senior negotiator involved in the discussions.

That issue will have to be taken up at a later date in 2019.

Ministers also did not agree to emphatically embrace the latest climate science, which stunned some attendees. Countries reached a "compromise" statement in which they welcomed the publication of an alarming report from the Intergovernmental Panel on Climate Change (IPCC).

They stopped short, however, of welcoming its actual findings.

Vulnerable countries, including small island states that could see their entire territories disappear as seas rise, agreed to the text to ensure the rulebook moved forward, he told CNN.

"We understand the need to consensus-build," he said. "And for small island developing states we have achieved our minimum -- minimum -- asks with regard to key issues."

The IPCC report says the world has only about 12 years to avoid 1.5 degrees Celsius of warming above pre-industrial levels, which is one of the goals of the Paris Agreement.

That report is an "ear-splitting wake-up call," UN Secretary-General António Guterres said upon its release. The science crunched the timeline for doing something and upped the stakes of inaction. In Poland, Guterres said it would be "suicidal" and "immoral" to fail at COP24.

The United States, Saudi Arabia, Russia and Kuwait, however, stood in the way last week of "welcoming" the findings of the scientists. The Trump administration has denied the basic consensus of climate science, which is that humans are causing dangerous warming by burning fossil fuels.

President Trump has promised to withdraw the United States, which has done more to cause climate change historically than any other country, from the Paris Agreement.

That withdrawal can't fully take place until 2020, however, so the United States did have a presence at these talks -- at times humming along in negotiations and at times promoting coal technology. Observers disagreed about whether the United States aimed to spoil talks here.

The talks were supposed to end Friday but were delayed repeatedly over disagreements about the basics of climate science and some aspects of how the rulebook would function, technically. Observers also said there were disputes about how money would be transferred from rich to poorer countries to help with projects meant to blunt the severity of climate impacts like drought -- and to whom it would be transferred.

COP24 was met with repeated protests from environmentalists and young people, who have more to lose than adults because they will live longer into the warming future. Inspired by a Swedish 15-year-old who called for a global school walkout to demand climate action, dozens of Polish students left school and marched into the conference center in Katowice on Friday.

"You are not mature enough to tell it like it is," Greta Thunberg, the 15-year-old activist from Sweden, said in the speech before negotiators. "Even that burden you leave to us children."

At the walkout, the children held pieces of a sign reading, "12 years left."

In order to avoid 1.5 degrees of warming, the IPCC says carbon pollution must be cut almost in half by 2030, less than 12 years away, and then reach "net zero" by mid-century. That would require a massive reworking of the global energy and transport systems, experts said.

The Paris Agreement is meant to help avoid that level of warming by creating a sort of peer pressure system that encourages countries to abandon dirty energy sources like coal, oil and natural gas, which already have contributed to 1 degree of warming. The pledges that countries have made as part of the agreement, however, put the world on track for about 3 degrees of warming by 2100, according to Climate Action Tracker, an independent research effort.

Warnings on global warming are becoming increasingly dire. Despite the fact that the White House has denied the strong consensus on the science of climate change -- and has tried to boost coal extraction and reduce pollution controls -- US federal agencies in November put out a report saying runaway climate change is both dangerous and costly.

"With continued growth in emissions at historic rates, annual losses in some economic sectors are projected to reach hundreds of billions of dollars by the end of the century -- more than the current gross domestic product of many US states," the US National Climate Assessment found.

In worst-case scenarios, climate change could cost more than 10% of US gross domestic product by the end of the century, the report said, and kill thousands of Americans.

Diplomats convene at the end of each year for negotiations that are part of the UN Framework Convention on Climate Change. Countries are expected to renegotiate open questions about emissions trading next year. New pollution-cutting pledges are due in 2020.