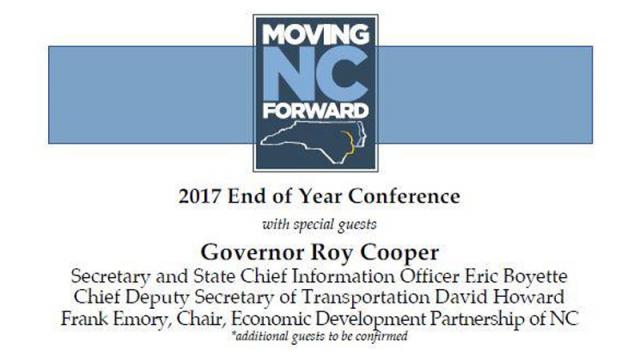 Raleigh, N.C. — A dark money group with ties to Gov. Roy Cooper's campaign apparatus will gather again next month for a fundraiser starring the governor as a special guest, according to an invitation forwarded to WRAL News.

The event will also feature a pair of high-ranking officials from the Cooper administration – Chief Information Officer Eric Boyette and Chief Deputy Secretary of Transportation David Howard – as well as Frank Emory, chairman of the Economic Development Partnership of North Carolina.

As with a similar event this summer, an invitation from Moving NC Forward doesn't list suggested donation amounts for potential attendees. It directs them to RSVP with Kate Connelly, who was the finance director for Cooper's 2016 gubernatorial campaign. Connelly is now on contract with Moving NC Forward, according to paperwork on file with the state.

Cooper spokesman Ford Porter said the governor "will speak at the conference but is not involved in any fundraising."

WRAL News asked what role other state employees will play in the two-day event, but Porter's response dealt only with the governor. He referred any other questions to event organizers, but Connelly did not immediately return a message left for her at the telephone number on the invitation.

The group is a 501(c)(4), named for the section of the U.S. tax code it operates under. These "social welfare" groups can't be solely political, but they typically can spend half of what they raise on political causes. They don't have to disclose their donors, leading to the "dark money" tag and concerns that they represent a path for wealthy donors to purchase access without disclosure.

These groups have become fairly common in modern politics, and this one is not unlike Renew North Carolina, a group created by some of former Gov. Pat McCrory's backers shortly after his election. That group also raised money through conferences that featured appearances by McCrory, and it aired television ads starring him.

"So much mystery money flowing into political campaign operations," said Bob Hall, executive director of the left-leaning good-government group Democracy North Carolina. "It's very hard to understand who's benefiting or who's putting money in. What are they expecting out? It's become too normal at this point."

This appears to be Moving NC Forward's third major event of the year. Cooper also attended the group's gathering this summer. In late March, the group offered donors a chance to mingle with Cooper and his leadership team. An invite for that event promised "policy talks" and suggested donations between $10,000 and $100,000.

The latest event starts Dec. 7 with a 6 p.m. reception and continues Dec. 8 with breakfast, three hours of "policy discussions" and a closing luncheon, according to the invitation. It will be held at the Ballantyne Hotel in Charlotte, where rooms run about $265 a night, according to the hotel's online booking system.