Raleigh, N.C. — As it became clear Republican lawmakers were ready to end negotiations and vote a budget through with or without his support, Gov. Roy Cooper made one last offer in a bid to move North Carolina toward Medicaid expansion.

At least vote on it, he told legislative leaders.

The two-page request was the last written document in over a month-and-a-half of back and forth between Cooper and top GOP lawmakers. Only a handful of written offers and counter-offers traded hands, based on an open records request Senate President Pro Tem Phil Berger's office fulfilled late Wednesday afternoon, two days after lawmakers rolled out their final budget.

WRAL News had requested the documents from Berger's office, House Speaker Tim Moore's office and Cooper's office on Oct. 20. None of the officials provided a justification for withholding the public records for nearly a month.

Negotiations kicked off in late September, with lawmakers sending the governor a packet summarizing a budget worked out between House and Senate leadership. Among other things, it included 2 percent annual teacher salary increases over the two-year plan and business and personal income tax cuts. It didn't include Medicaid expansion – a key priority for Cooper his entire time in office.

Lawmakers have said they spoke with the governor, and legislative and administration staffers worked together. Both sides have said good-faith negotiations took place, though the Governor's Office said Wednesday evening that Republicans moved the goalposts near the end of negotiations.

Both sides wanted secret negotiations, so a full accounting may be impossible. But the half-inch pile of documents, provided Wednesday shines some light on how negotiations went.

The governor responded to lawmakers in early October, asking for Medicaid expansion and reminding them that, if the state expanded the health insurance program, the federal government would kick in an extra $1.3 billion over the next two years – an enticement included in pandemic relief legislation for the 12 states that haven’t yet expanded th etaxpayer-funded health insurance program.

He also asked for $200 million more for K-12 education than Republican lawmakers had proposed in the budget’s first year and $500 million more in the second. He wanted an average 8 percent raise for teachers over the two-year budget, compared to the roughly 4 percent lawmakers sent him.

He also proposed an alternate tax package, holding back on tax cuts Republicans wanted by tying them to triggers. If state revenues stayed healthy enough, cuts in the personal income tax rate, corporate tax rate and changes to the business franchise tax would move forward, though not as quickly as lawmakers wanted.

Instead of a complete phaseout of the corporate income tax Republicans wanted, Cooper pitched a decrease to 1.25 percent by 2032. The current rate is 2.5 percent. 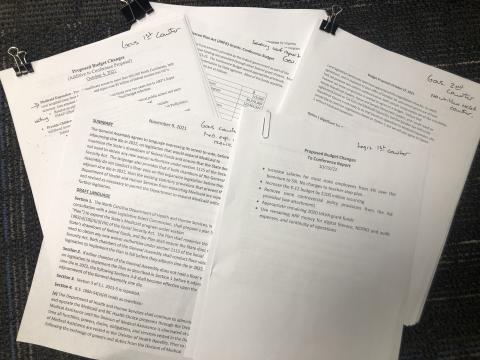 They would add another $100 million to the K-12 budget – half as much as the governor wanted in the first year, and a fifth of what he asked for in the second. They would also boost employee salaries from the proposed 4 percent over the two-year plan to 5 percent.

They declined to change the salary plan for teachers.

They also agreed to remove some 20 policy provisions – items that had nothing to do with spending money but changed other aspects of state law – from the budget. For example, no longer would the budget require teachers to post classroom materials online, nor would it forbid local governments from limiting tree cuttings on private property.

Perhaps even more importantly, they agreed to drop a measure limiting the governor's power to close businesses and impose other executive orders in an emergency, something GOP lawmakers wanted for months and Cooper had already vetoed in a separate bill. That ended up in the final budget, which Cooper has said he'll sign, though the implementation is delayed to 2023.

One: Expand Medicaid, raise teacher salaries 6 percent over the two-year budget, keep the extra $100 million Republicans offered for K-12 funding, increase school construction funding by $500 million, make a few other changes and the governor would sign off on Republican tax cuts – including a total phaseout of the corporate income tax – albeit on a longer timetable than lawmakers wanted.

Two: Without Medicaid expansion, Cooper said he wouldn’t sign off on the corporate income tax cut, but he would agree to increase the standard and child deductions for personal income taxes, in effect cutting state income taxes.

It was around this time that top state Republicans told reporters that they might put together a final budget on their own, drawing from some of the governor’s proposals but ultimately giving Cooper a take-it-or-leave it decision.

Cooper made one last formal pitch last week: Lawmakers wouldn’t have to expand Medicaid, but they would have to promise to put the issue to a vote in 2022.

If both chambers didn’t do that, Cooper’s offer said, that would trigger a change in state law allowing the Cooper administration to expand Medicaid on its own.

The votes wouldn’t have to be successful, but they’d have to be held. In the budget lawmakers actually voted on this week, legislators didn’t promise a vote – and they certainly didn’t allow Cooper to expand Medicaid on his own – but they agreed to a study committee on Medicaid expansion that will report next year to the General Assembly.