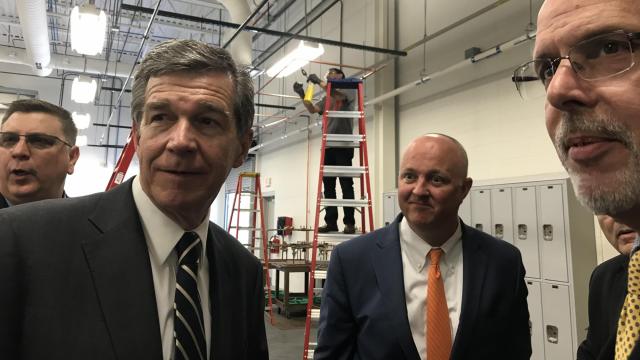 It would be part of $60 million the governor plans to put in his forthcoming budget proposal: $20 million for these "Finish Line Grants," $30 million to boost free job training in high-demand fields and another $10 million in competitive grants to businesses to set up paid internships and apprentice programs.

All of this will go before the state legislature when it comes back into session May 16, and Republican majority leaders there will doubtless have their own ideas about how to tweak the state budget. Cooper has focused on workforce training this year, and he's been rolling out budget proposals piecemeal.

Last month, he called for $130 million for school safety and mental health initiatives and $14.5 million to address GenX contamination and water quality. He has hinted at a proposed increase in teacher pay but hasn't yet rolled that out.

Cooper said the $20 million fund was inspired by a group of Western Carolina University professors who raised money for a student who planned to drop out because expensive car repairs made it impossible for her to cover tuition. They turned the effort into a fund for students in similar situations, the governor said.

"Students shouldn't have to depend on the generosity of faculty – we need to get more pay to them, by the way – to finish their education," Cooper said during a visit to Wake Technical Community College.

Community college students within 15 hours of a degree would be eligible for up to $1,000 a semester through the program, and $5 million would be set aside for them. University students within 30 hours of graduation and who keep a minimum GPA would also be eligible for $1,000 a semester. The program would earmark $10 million for University of North Carolina system colleges and $5 million for private colleges, the Governor's Office said.

Cooper said grant decisions would be made at the campus level, and he would like to see grants flow quickly to people who need them.

The $30 million proposed for training in high-demand fields, through a program called NC GROW, would help cover tuition and some fees for students in fields identified by the state's Community College System and Department of Commerce. Employers in a number of fields tend to have difficulty filling jobs.

A report last month said there were 20,000 high-tech job openings in North Carolina, and Cooper mentioned this sector during his announcement Wednesday, along with construction and health sciences.

The $10 million Employer Training Fund would support a range of work-based learning programs, including "up-skill/back-fill projects" to help existing employees develop skills needed to fill new roles and back-fill job openings. The Department of Commerce would collaborate with Workforce Development Boards, community colleges, employers and other industry partners to design and implement the grant program.

"Sometimes, these businesses just need a little kick start," Cooper said, "particularly smaller businesses that can be very successful with this."

Cooper took a tour of manufacturing training facilities at Wake Tech and held a roundtable with local employers, educators and students. Cooper said he wants to emphasize, as early as middle school, that not everyone needs a four-year degree.

"Four-year degrees are great," the governor said. "But there are many other pathways to success ... that cost a lot less money."