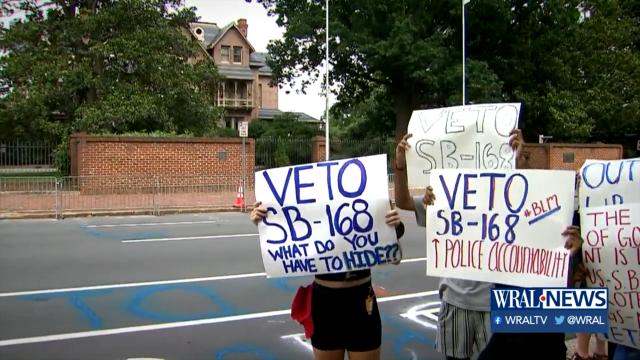 Raleigh, N.C. — Following public outcry and two days of protests about a measure that would shield death investigations from public access, Gov. Roy Cooper said he has concerns about the language under scrutiny.

During a press conference Wednesday, Cooper indicated he supported overturning the language, which was originally requested by the state Department of Health and Human Services, part of his administration.

“I think there are going to be some conversations with the General Assembly about how we fix this,” Cooper said. “I think most people don't want to have that provision, and I think we'll find a way to fix it.”

Cooper did not say whether he is considering vetoing the bill, but it was not signed as of Wednesday afternoon. If he does not veto it, the new law will go into effect Monday with or without his signature.

Passed after midnight by the legislature as it prepared to adjourn, the language in Senate Bill 168 would shield from public view any confidential records shared with the Office of the Chief Medical Examiner in a death investigation. Such records, investigative reports from law enforcement agencies, for example, would become public once in the hands of the OCME.

Chief Medical Examiner Dr. Michelle Aurelius said Friday the agency needs the provision because, otherwise, law enforcement agencies are reluctant to hand over certain records. When asked to cite a specific case where her office could not obtain such records for a death investigation, she was unable to do so.

Lawmakers tucked the provision into a 17-page bill that makes a litany of technical changes to DHHS-related laws – items Cooper labeled as “positive” in his comments Wednesday. Every legislator but one voted in favor of the bill.

DHHS also asked for the change in 2019. Agency officials said earlier this week that the provision was not intended to keep death records from the public, only to shield confidential police records.

But agency officials have no power to determine how local government officials, other state agencies and the courts will interpret the language that legislators wrote.

Opposition to the bill mounted later as news reports and word about the records provision circulated on social media. Protesters have gathered in front of the Executive Mansion in Raleigh, and some have been arrested.

Public records experts, and even some of the lawmakers who voted in favor of the bill, have expressed concern about potential unintended consequences.

The bill gained nationwide notoriety when highlighted by rapper and filmmaker Ice Cube in a tweet on Monday.

“This is so dirty,” Ice Cube tweeted. “… Governor Cooper do not sign this into law. Don’t give more cover for Killer Cops.”

Following public attention on the bill, the health department itself and legislators who originally voted in favor of the legislation have also agreed to the removal of the records provision.

“Because this provision has now raised concerns, we recognize it is in everyone’s best interest to take a step back from the process and reassess,” health department Assistant Secretary for Government Affairs Matt Gross said in an email late Wednesday afternoon.

“We look forward to working with legislative leaders who have also expressed a willingness to repeal this provision when session reconvenes next week.”

But in a letter that Senate Rules Chairman Bill Rabon, R-Brunswick, sent Wednesday to Cooper, Rabon said DHHS officials have still not requested the secrecy language be changed.

“Multiple legislators and staff have reached out about the public records provision, and your team has provided a thorough explanation and defense of your administration’s rationale each time,” Rabon wrote.

Rabon said Senate Republicans were willing to change the language only if requested by the Cooper administration.

“However, if your position on the public records provision in Senate Bill 168 has changed, we will remove it next week after you sign the bill,” Rabon said in the letter sent following Cooper’s press conference. “Your team has so far defended the provision, so it appears as if you still support it, but I do respectfully ask that you clarify the situation as soon as possible.”

This story was jointly reported and edited by Kate Martin and Frank Taylor, of Carolina Public Press; Lucille Sherman and Jordan Schrader, of The News & Observer; Nick Ochsner, of WBTV; Emily Featherston, of WECT; and Tyler Dukes, of WRAL.