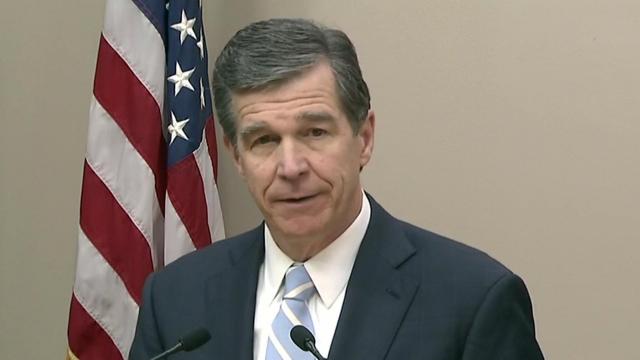 Raleigh, N.C. — Gov. Roy Cooper called Wednesday for an increase in North Carolina's minimum wage and said it need not be the $15-an-hour phase-in many Democrats have called for.

"We need to work with the General Assembly to see how high we can get it," Cooper told WRAL News. "$15 is an admirable goal."

The governor also said he'll try again this legislative session for unemployment insurance reforms, including an increase in the number of weeks that out-of-work North Carolinians receive benefit checks. The state caps those benefits now between 12 and 20 weeks, depending how strong the economy is, and the benefits are some of the country's lowest.

Cooper's comments came in a morning speech to the AFL-CIO and from a brief conversation with WRAL News afterward. Republican leadership in the General Assembly didn't immediately respond to the governor's proposals, which are in line with positions he's staked out in the past.

NC may be first state to pay employees $15 an hour

Cooper's priorities may have more power this year, though. Republicans still hold majorities in both General Assembly chambers but not the super-majorities that allowed them to largely dismiss the Democratic governor's veto the last two years.

Cooper also endorsed, in broad strokes, a larger list of the AFL-CIO's legislative priorities Wednesday, telling the group's assembled leadership that they "align with the mission" he's staked out.

He singled out a number off issues, including the labor group's push for an increase in the state's current minimum wage of $7.25 an hour. Get a bill passed and, "I look forward to signing it," Cooper said.

Most of the 150 or so people in attendance stood and applauded.

Several Democrats have filed legislation this session calling for a multi-year phase-in to $15 an hour, but the governor said after his speech that he was willing to deal on less ambitious plans.

Cooper also called the state's unemployment benefits, capped at $350 a week, "quite stingy." He didn't call for an increase in the cap but said he wants the benefits to run longer. He also proposed, as he did in his budget last year, a change to the tax structure for employers and tweaks that will raise more job training money for the state.

Republicans rolled back unemployment benefits in 2013, after the system fell some $2 billion in debt to the federal government in the wake of the Great Recession.

The trust fund has since recovered to about $3.4 billion, which is at or close to the highest it's ever been, according to the state Division of Employment Security.

That's more than $900 million above what the U.S. Department of Labor recommends systems to have on hand, the Cooper administration has said.

Correction: This post initially misstated the range of weeks unemployment is available and has been corrected.