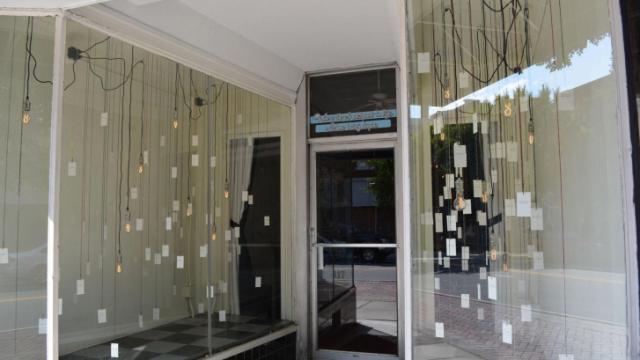 "We rely heavily on word of mouth," Neill said while sitting on the pack patio of Bar Lusconi in downtown Durham. "People have to find us, but once they do, they have no problem finding us again."

Lusconi and its sister bar - Peccadillo in Carrboro - have very little signage outside, meaning you might have walked right by them without even noticing. Their websites also offer very little information besides the address and telephone number.

The only signage for Bar Lusconi, which is at 117 East Main Street, is small business cards hanging next to light bulbs in the windows. (If I didn't know the address, I would have walked right by and still be looking for it!)

Neill said he loves neon signs, but they just don't fit the intimate vibe he is going for with both bars.

When inside Bar Lusconi, you feel like you found this hidden gem. An intimate wine and beer bar offering small plates including cheese and charcuterie plates, almonds, olives and chocolate.

Neill found the 600 square-foot space when he was looking for a location for an Italian espresso bar. With many other coffee options available nearby, he decided to turn the place into a bar. Without space for a full bar or a liquor license in Durham, Neill decided to go with wine and beer on the menu. Lusconi's selections are mostly from Europe, and ones that Neill, an avid traveler, has enjoyed at other bars across the country.

If patrons are unfamiliar with the wine or beer on the menu, Neill welcomes questions. Just let the bartender know what you like and they can help point you in the right direction.

Some work had to be done on the shotgun-house-style location, which used to be home to an acupuncturist. Neill said his goal was to let the character of this decades old building shine through. Part of the wooden floor was rotting, so he used the good portions when constructing the bar. The original tin ceiling remains.

Australian-born Neill has been in the bar industry for about 20 years in New York and along the East Coast. The former computer software programmer was drawn to the Triangle four years ago by its vibrant food and wine scene. "It is striving in all sorts of different directions," he said.

He opened Peccadillo, 100 Brewer Lane in Carrboro, in December 2011. It has since become known for its signature cocktails and great atmosphere.

In the year and a half since Bar Lusconi opened, that section of downtown Durham has seen a resurgence of nightlife with even more bars - like Bar Virgile - on tap nearby.

But Neill is keeping his strategy the same. As word of mouth grows, he loves seeing customers return with friends. "They always walk in and say, 'I told you this was here!'" Neill said.