Congresswoman: New immigration rule is 'an excuse to rid the country of people who look like me' 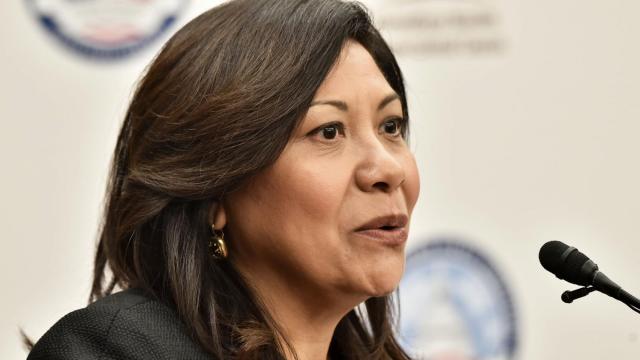 CNN — Rep. Norma Torres slammed President Donald Trump over his administration's new regulation that could slash the number of legal immigrants in the US, suggesting it was "an excuse to rid the country of people who look like me."

In an interview with CNN on Monday, the California Democrat suggested that the policy targets people of color and punishes legal immigrants for "taking some assistance to make ends meet." The new rule could allow the government to turn down green card holders and visa applicants if they have low incomes or little education, and have used public benefits like most forms of Medicaid, food stamps and housing vouchers.

"Rather than looking at them through the lens of this is what every other citizen in the country is suffering because we have not raised the federal minimum wage in a long time, and because the cost of doing business keeps rising, and everything is costing more -- rather than looking at it through that lens, he wants to punish them," Torres said.

"But punishing them is just an excuse to rid the country of people who look like me," she said. Torres immigrated to the US from Guatemala as a child and is the only Central American member of Congress.

"Only someone who has grown up with a silver spoon in his mouth, who has filed bankruptcy so many times and has never had to suffer a consequence of being homeless, of being without a paycheck, without a job because of an illness, only someone like that can put forward a policy like this and think that it's OK," she said.

The regulation unveiled Monday broadens the scope of who could be considered a "public charge" -- someone who is "primarily dependent" on government assistance. There are exceptions to the rule, such as benefits received by active duty member of the military, Medicaid for pregnant women, children under 21 years old and emergency medical care. It doesn't impact refugees or asylum seekers.

Acting US Citizenship and Immigration Services Director Ken Cuccinelli told reporters Monday that the rule will encourage "self reliance and self sufficiency for those seeking to come to or stay in the United States."

"We certainly expect people of any income to be able to stand on their own two feet, so if people are not able to be self-sufficient, than this negative factor is going to bear very heavily against them in a decision about whether they'll be able to become a legal permanent resident," Cuccinelli said when asked if the rule unduly targets low-income immigrants.

Torres told CNN that the rule will "absolutely" have a chilling effect on immigrants who may need public aid -- a view echoed by advocates.

"We're already getting reports that people are taking themselves off of waiting lists for housing, that people are now not reporting back and not keeping food stamp assistance," she said.