Partial government shutdown likely to continue until after Christmas 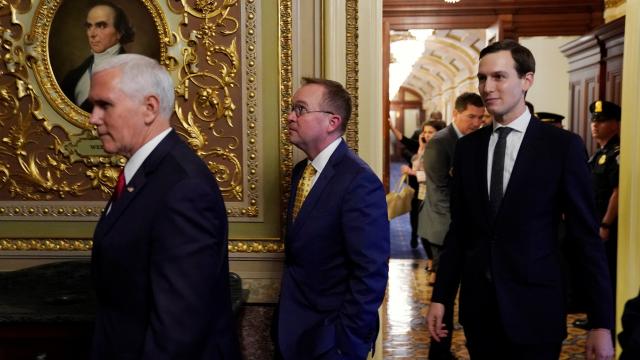 (CNN) — The Senate adjourned for the day Saturday afternoon without coming to an agreement on a spending deal that would end a partial government shutdown -- likely assuring the federal closures will continue until after Christmas.

The developments come hours after members of Congress and President Donald Trump were unable to reach an agreement Friday night, resulting in the third government shutdown of the year.

There will be a pro forma Senate session on Monday, but the next actual session is scheduled for Thursday afternoon.

The move means members can travel home for Christmas and not worry about being called back to vote until a deal could be reached, but GOP leaders told senators that if there was no deal by Thursday, they would not have to return for that session, sources tell CNN.

In the unlikely event a deal is reached by Monday, the pro forma session could be used to pass it by unanimous consent or voice vote, something that would only require one senator to be in attendance.

"If an agreement is reached, we'll come back and pass it," Senate Majority Leader Mitch McConnell told reporters as he left the floor.

McConnell announced on the Senate floor earlier Saturday that there would be no action on the floor until Trump and Senate Democrats come to an agreement.

McConnell said the Senate was, in the meantime, pushing "the pause button" while the two parties attempt to work out a deal.

He then began discussing the importance of border security and "securing the homeland."

Later in the day, Senate Minority Leader Chuck Schumer addressed Trump while speaking on the Senate floor, saying, "President Trump, if you want to open the government, you must abandon the wall -- plain and simple."

During his speech, Schumer said Trump must publicly say he will support any agreement in an effort to avoid what happened earlier in the week, when White House aides indicated Trump would sign a stopgap spending measure, but then later said he would not.

Schumer also responded to McConnell's earlier comments that an agreement would need to be made between both Trump and Senate Democrats.

"Leader McConnell can't duck out of it," Schumer said.

On Friday, Vice President Mike Pence, budget director Mick Mulvaney and the President's son-in-law, Jared Kushner, came to Capitol Hill, where they stayed into the evening after both the House and Senate adjourned for the night.

Pence returned to Capitol Hill on Saturday, where he was set to meet with Schumer.

The vice president was expected to give a readout of a White House lunch Trump held with some conservative House Freedom Caucus members and other Republican lawmakers. Schumer was expected to reiterate that border wall money can't pass the Senate, a Schumer aide said.

Any bill to re-open the government will need 60 votes to pass the Senate because of procedural rules, meaning Republicans will need some Democratic votes.

Funding for roughly a quarter of the federal government expired at midnight, including appropriations for the departments of Homeland Security, Justice, Housing and Urban Development and other parts of the government. This is the first time in 40 years that the government will have been closed three times in a year.

The funding legislation that earlier this week seemed certain to pass both chambers was thrown into limbo on Thursday when Trump told House GOP members he would not sign a bill unless it included $5 billion to fund a border wall.

Despite the House of Representatives passing a bill on Thursday, which included this demand, it was clear on Friday that there was not enough support in the Senate for the bill, including the $5 billion for the wall, to clear.

Friday night, a path forward appeared ambiguous, as all sides seemed stagnant in their demands days before the Christmas holiday, when Congress was expected to be out of session.

Republican Sen. James Lankford of Oklahoma, who was briefed by Pence, Kushner and Mulvaney on Friday, told CNN's Suzanne Malveaux on Saturday morning that the hope is McConnell will have a deal to announce when the Senate reconvenes at noon.

The debate between the White House and Congress focuses not just on how much money to allocate to border security, but also on the language stipulating where and how that money can be spent, he said.

"What is fencing, what is land ports of entry, what's technology, what's staffing?" Lankford said. "I think there's a general agreement ... that we need to do border security. Now's figuring out how much for each amount."

"Right now we're trying to finalize all the final text and to be able to make sure everyone's looked at it, everyone's agreed, signed off on it. ..." he said. "Then we'll move to a vote 24 hours from there."

Lankford also said he is "confident" that if Pence says the President is on board with any deal, Trump will keep to his word.

"We've agreed in the Senate we're not bringing anything to the floor until we know all three bodies have agreed to it," Lankford said. "Then we can expedite it through the process on the floor."

If there's no an agreement, Lankford said he believes the American people will be looking at a much longer shutdown.

A Senate Democratic aide said Saturday that talks continue at the staff level and confirmed that any deal will need signoff from congressional leadership and Trump before it comes to a vote. Democrats continue to push for border security options that they believe work, rather than a wall. Senate Minority Leader Chuck Schumer has insisted to Pence and Republicans that the President must sign off on that before a vote.

Trump earlier on Friday predicted a shut down, but placed the blame on Democrats, saying "it's really the Democrat shutdown, because we've done our thing.

"The chances are probably very good" that there is a shutdown," Trump said Friday afternoon.

He later added: "Now it's up to the Democrats as to whether we have a shutdown tonight. I hope we don't, but we're totally prepared for a very long shutdown."

And in a White House-produced video posted on Twitter two hours before the government was partially closed, Trump said, "We're going to have a shutdown. There's nothing we can do about that because we need the Democrats to give us their votes." He added, "The shutdown hopefully will not last long."

House Minority Leader Nancy Pelosi and Schumer threw the blame back at Trump and Republican lawmakers in a joint statement shortly after midnight, saying if "this Trump shutdown" continued, "the new House Democratic majority will swiftly pass legislation to re-open government in January."

When he appeared to be leaving on Friday night, however, Senate Majority Leader Mitch McConnell said "constructive talks are underway."

When he was asked if he would be coming back to participate in the talks, the Kentucky Republican said, "as I've said repeatedly, we need Democratic votes and presidential signature."

A person familiar with Pence, Kushner and Mulvaney's five-hour trip to the Capitol said they made it clear that the initial request that included just $1.6 billion for the wall wasn't going to cut it.

"There is no quick end to this," said one source with direct knowledge of the talks.

If a deal is to be reached, votes could happen as early as Sunday.