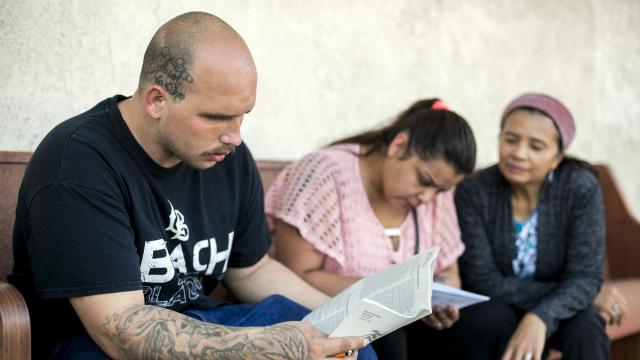 Millions of voters streamed to the polls across the country Tuesday, many facing long lines, heavy rain or rickety voting machines, to cast ballots in an enormously anticipated and competitive midterm election that will decide control of the House, Senate and governors’ offices in major states, and determine the breadth or limits of President Donald Trump’s power over the next two years.

With the election widely seen as a referendum on Trump’s policies and conduct in office, strong turnout was reported in many of the states crucial to the control of the House and the Senate. Many voters opposed to Trump had been waiting since Election Day 2016 to get a chance to rebuke him, but droves of Republicans were determined to turn out to send a vote of confidence in their leader and the GOP agenda.

Far more Americans took advantage of absentee and early voting this year than during the last midterm election, with 39 million of those ballots cast nationwide compared with 27 million in 2014.

No matter who wins, the elections are bound to reshape how Americans see politics, the Trump presidency and individual battleground states.

Many voters were waiting to see if the country would place a check on Trump and Republican power in Washington, and if antagonism toward the president would fuel a wave of Republican losses. But just as Trump shocked many Americans with his victory in the Electoral College in 2016, the possibility that he might receive a political boost Tuesday with Republican wins in the House and Senate — if not a mandate for the next two years — was a bracing thought for Democrats, and an energizing one for Republicans.

In Chapmanville, West Virginia, a hardware store worker, Chance Bradley, said he was voting Republican because Trump had made him “feel like an American again.” But Carl Blevins, a retired coal miner, voted Democratic and said he did not understand how anybody could support Trump — or, for that matter, the Republican candidate for Senate there, Patrick Morrisey.

“I think they put something in the water,” Blevins said.

The political leanings of battlegrounds like Pennsylvania, Ohio, Michigan, Wisconsin and Iowa were also a huge of focus of interest Tuesday. Those states voted for Trump in 2016, and Republicans were fighting to extend their hold on them, while Democrats were aiming to pick off governor’s offices in several and demonstrate strength before the 2020 presidential election.

More immediately, control of both chambers of Congress was at stake Tuesday. Republicans hold a 23-seat majority in the House and a precarious, one-seat majority in the Senate; if they maintain control, Trump and his allies are likely to pursue an aggressive legislative agenda on tax cuts and immigration.

But the heavily rural collection of Senate races on the ballot this year heavily favored the GOP, leaving it better positioned to try to retain power there than in the House, where the country’s major metropolitan areas have greater influence — and where Trump’s presidency and divisive style have alienated moderate and independent voters.

House Minority Leader Nancy Pelosi, D-Calif., predicted sweeping Democratic gains Tuesday during a private meeting with political allies in Washington. But she warned that Trump might attempt to brand the election as “rigged” if the ultimate result was close, according to three people present for her remarks.

Trump has appeared sensitive in recent days to the possibility that losing the House might be seen as a repudiation of his presidency, even telling reporters that he has been more focused on the Senate than on the scores of contested congressional districts where he is unpopular. And Trump insisted that he would not take the election results as a reflection on his performance.

“I don’t view this as for myself,” Trump said Sunday, adding that he believed he had made a “big difference” in a handful of Senate elections.

Yet in interviews Tuesday, voters in both parties repeatedly agreed that the election was fundamentally about Trump, and that the country was bitterly divided. But they could not agree on whose fault that was.

Debbie Eschbacher said at a polling place in Chesterfield, Missouri, that she was sick of what she described as “liberals yelling at people.” Jay Kim, on the other hand, said he was sick of Trump “dividing the country.” Early exit polls of voters, released by CNN on Tuesday night, showed a mixed assessment of Trump as well as of Democratic leaders, and a generally gloomy mood in the country after months of tumultuous campaigning marked by racial tensions and spurts of violence.

That pessimism belied the positive impression most voters hold about the economy halfway through Trump’s term. Sixty-eight percent of voters said they believed it was in good shape; when it came to personal finances, only 14 percent said they were worse off than a year ago. Eighty-four percent said their finances were either better off or in the same position.

Trump has campaigned hard on appeals to law and order and fears over immigrants in the country illegally, but the exit polls suggest most voters have been focused on something else: health care.

Forty-one percent of voters said health care was the most important issue facing the country, while only 23 percent cited immigration. The economy was the top issue for 21 percent of voters, and 11 percent said they were most concerned with gun policy.

Overall, 39 percent of voters said they went to the polls to express their opposition to the president, while 26 percent said they wanted to show support for him. Thirty-three percent said Trump was not a factor in their vote.

An array of elections on the East Coast for Congress and several powerful governorships were expected to give an early indication of how far the country has swung back toward the political middle — or even to the left — since Trump’s upset victory in 2016.

Several dozen contested congressional races, in states including Virginia, Florida, New Jersey and Pennsylvania, had the potential to put Republicans’ majority in the House at risk. The GOP has struggled to maintain its political footing in the country’s moderate suburbs under Trump’s leadership, and educated white voters in these areas have been defecting to Democrats in strong numbers since last year.

Both parties were also closely watching several more conservative districts, from the Virginia coastline to central Kentucky, for signs of Republican tenacity with rural and blue-collar voters.

Most significant in the East might be a pair of governorships in Georgia and Florida, historically Republican-leaning states where Democrats nominated liberal African-American candidates in a daring bid to make political history. Stacey Abrams, the former Democratic leader in the Georgia House, and Andrew Gillum, the mayor of Tallahassee, would both be the first black governors in their states, if elected.

Governor and Senate races across the Midwest were also expected to signal the strength of the unconventional political coalition that elected Trump in 2016. Republicans were girding for defeat in Michigan, where Trump narrowly won, and Illinois, where he did not. They anxiously watched races in Wisconsin, Iowa and Ohio to see if the party’s ascendancy there would endure.

Should congressional Democrats fail to make powerful gains in the East and Midwest, there is the potential for a long night of vote-counting and even days or weeks of indecision if control of the House comes down to California. More than half a dozen Republican-held House seats are at stake there and the state’s vote-by-mail system makes for notoriously slow tabulation.

Puerto Ricans, many of them displaced by Hurricane Maria, turned out in droves in Florida, where both the Senate and governor’s races were competitive. Martín Coto Colón split his ballot: He voted for Andrew Gillum, a Democrat, for governor, but Rick Scott, the Republican serving as governor, for the Senate.

It all came down, Coto said, to how candidates behaved toward Puerto Rico. Scott visited the island at least eight times after the storm. But Coto said that he felt Trump had shown a “lack of respect” in Puerto Rico and that Ron DeSantis, Gillum’s Republican opponent, was too close to the president.

In Orlando, Frameyry Baez, a Dominican immigrant, said that after many years as a legal permanent resident, she had become an American citizen in response to the 2016 election. Now, she said, she was voting a straight Democratic ticket — largely because of Trump’s and other Republicans’ immigration rhetoric and policy, which she called racist.

“This will be the first time I have the opportunity,” Baez said, “and I will try to make change.” After weeks of anxiety about possible voter suppression, snags were reported in some states.

In New York, lines spilled out of the doors of libraries and public schools as some people waited as long as four hours to vote. The city’s two-page ballots caused scanners at a number of polling sites to jam, and officials said rain-dampened paper had made the problems worse. Millions of voters along the East Coast and the Great Lakes turned out in thunderstorms and gusting wind.

But both parties prepared for a long night of vote-counting in a series of House and Senate contests as well as governorships that are on a knife’s edge. The most uncertainty in governor’s races was centered on campaigns in large states like Georgia, Florida and Ohio while Democrats were hoping to spring upsets in red states like South Dakota, Oklahoma and Kansas.

All the results will likely not be known by the end of the night: California and Arizona, for example, will both continue to tally ballots that come in by mail the election so long as they are postmarked by Tuesday.