Confederate flag flies again off I-95 north of Fayetteville 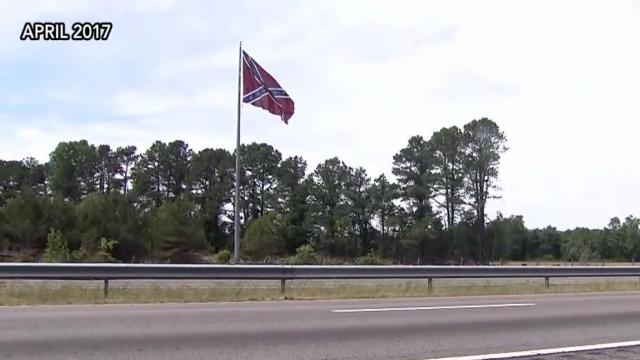 By Myron B. Pitts, The Fayetteville Observer

Fayetteville, N.C. — A giant Confederate flag that had been removed from its 90-foot pole off of southbound Interstate 95 has been replaced with another one.

R. Kevin Stone, commander of the North Carolina Division of Sons of Confederate Veterans, said by email Tuesday night to The Fayetteville Observer that the flag “was removed just ahead of the last severe weather event in order to minimize potential damage.”

He added: “A brand new 20' x 20' Army of Northern Virginia Battle Flag was put up (Tuesday) by our site volunteers.”

Confederate flags along I-95 come down without explanation

The Confederate flag, which is located on private property north of Fayetteville, was originally placed in 2017 by the Sons of Confederate Veterans at a memorial site that honors Theophilus Hunter Holmes. He served as a senior officer in the Civil War, according to a news release of the dedication provided by Stone.