The Confederate flag has long stoked deep emotions among those who honor it and those who abhor it.

In a nation that increasingly spurns the symbol, the banner is still woven into the Southern landscape.

A large Confederate flag flies along Interstate 95 north of Fayetteville. The North Carolina Chapter of the Sons of Confederate Veterans raised the flag on a piece of private land in April 2017. On a block of granite beneath the flag are inscribed these words: A memorial to the Confederate soldiers who fought for their independence. 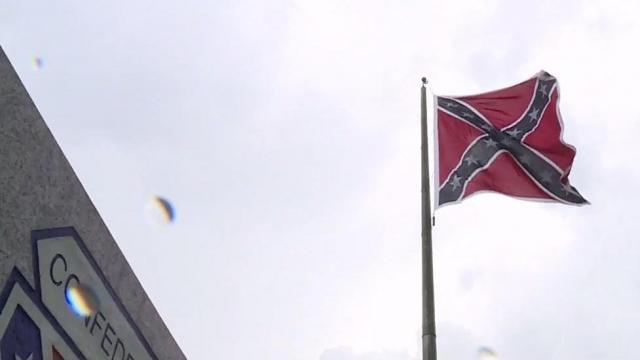 Bryan Avery, 56, a member of the group, lives in Harnett County and flies a smaller Confederate flag in his front yard. He has six ancestors who fought in the Confederate army. Only one came home alive.

"The flag to us represents our Christian ancestors who were called up by the governor of this state to serve the state," he says. "At that time, your state was your country. Your governor was your president."

He says 80% of Southerners never owned slaves. Those who fought in the war were poor farmers who answered the call of duty to protect their state.

"They didn't go to preserve slavery," he says. "They went for their independence."

Flag is "painful" for county commissioner

But Charles Evans, 60, a Cumberland County commissioner, says there's no glossing over the racist symbolism of the flag. The large banner along I-95 is to him "a slap in the face."

"Now when I take my trips up north, I look to my left and it brings some kind of feeling over me, because we know that flag was used as a symbol of hatred," he says. "To fly that flag is painful for black folks."

Cumberland County officials have said the flag violates no ordinances. But given nationwide protests against racial injustice, and the removal of Confederate monuments across the South, Evans says the county could explore ways to at least regulate the size.

"And I couldn't believe that right here in Cumberland County, we're confronted with a flag like that, that's so big, and I believe it was put there for a purpose," he says. "It gives a sense of fear to a number of people. I can't understand for the life of my why anyone would use their property or anywhere else to make someone feel like they are not welcome."

Evans was a small child during the civil rights movement, when the flag frequently flew in defiance of desegregation and voting rights. White spectators with Confederate flags taunted those marching with Rev. Martin Luther King from Selma to Montgomery. The Ku Klux Klan and other white supremacist groups wielded the flag.

In short, Evans says, the banner in modern America is not about honoring the Confederate war dead. "It gives a sense of fear to a number of people."

"And people respect it and pay honor to it because we're honoring our Christian ancestors who served this state," he says. "We hate slavery, injustice, we despise racism."