Two upcoming shows you need to know about:

The show is part of the "Last Summer on Earth" tour.

BNL vocalist/guitarist Ed Robertson had this to say about the tour's title.

"I'm a man of science, and therefore put zero stock in all of the disastrous predictions about the year 2012. But JUST IN CASE, I think everybody should come out and see one last great summer concert tour! It can't hurt, right? Here's hoping the Mayans just got tired of chiseling!" Robertson said in a press release. 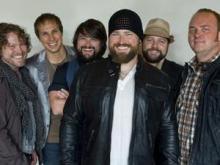 Monday's other big concert announcement was the Zac Brown Band at Time Warner Cable Music Pavilion at Walnut Creek. The band will take the stage on Friday, May 11.

Tickets for that show go on sale this Saturday at 10 a.m. through Live Nation and Ticketmaster.