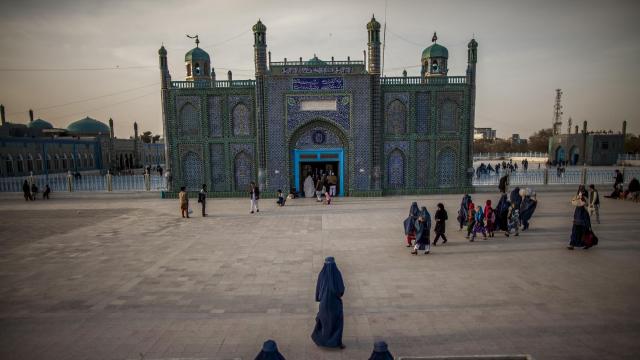 MAZAR-E-SHARIF, Afghanistan — For years, Rasool Landay went from place to place in northern Afghanistan, offering a very specialized and in-demand service: treatment for women unable to have children.

Now he is on the run.

Religious scholars and public officials have demanded his public execution. A provincial governor has offered his own armored vehicle as a reward for information.

Officials in Faryab province say the man known as Mullah Landay — who, despite passing himself off as an Islamic cleric, had no religious credentials — led an extortion ring targeting women.

With the help of at least two women who have been arrested so far, Landay is accused of exploiting women who were unable to have children by claiming he could “cure” them — first with religious amulets and, when that didn’t work, with sex.

He would film himself having sex with the women, and then he and his accomplices would extort money and jewelry from the women by blackmailing them with the recordings, according to Farid Ghori, the provincial prosecutor.

In addition to the extortion, the crimes Landay is accused of have raised an even more pressing concern for officials in Faryab: In a conservative society in which honor is tied to female sexuality and women’s relatives can turn on them violently over the slightest perceived transgression, what happens to the women suspected of having sought Landay’s services?

One of the answers may be that as the search for him widens, the dead bodies of women have started appearing in the places he visited.

If men suspect a female relative of having sex with Landay — perhaps even bearing his children — they may decide to kill her with the intention to preserve the family’s good name, a practice known as honor killing. So women who were deceived by Landay could end up being victimized again, by their own families.

“There have been several honor killings recently, and I wonder if they are related to this case,” said Naqibullah Fayeq, the provincial governor of Faryab.

While the near-term consequences of his actions have been devastating enough, the nature of what Landay is accused of will sow doubt and mistrust in the communities where he worked for years to come, with people wondering about the paternity of local children.

Fayeq said the body of a woman was found in mid-September in the Pashtun Kot district, near where Landay lived. Investigators are trying to determine whether it is related.

Sharifa Azimi, the provincial director of women’s affairs, said nine women had been killed in the past three months as a result of gender-based violence, compared with four in the same period last year.

“We are concerned that honor killings will increase, that the women suspected of going to him will be killed,” Azimi said.

Exact details about Landay’s life are scarce, but a brief sketch emerged in conversations with officials.

Believed to be around 40, Landay was a dancing boy as a teenager, often providing entertainment at the parties of local warlords who ruled the area during the civil war, according to Sebghatullah Selab, the deputy head of the provincial council. Landay’s career in deception began in Maimana, the provincial capital. There, he first collected fees from people seeking to use a public toilet, said Noor Mohammed, the tribal elder from his village. But he may have seen an opportunity in the superstition on display around the corner: People would come to hammer nails to a tree, a practice believed to cure toothaches.

Landay moved away from the toilet, put down a small rug and started reading palms. From there, he expanded to amulet writing, a superstitious healing practice in which papers inscribed with religious phrases are enclosed in jewelry and worn around a person’s neck or arm to cure their problems.

He specialized in offering to cure women who were unable to have children, reassuring them by using other women, one of them a police officer, to promote his services.

“He had developed a group that spread the word and brought people to him,” Fayeq said. “He would first give amulets, then he would say, ‘Bring a chicken,’ and next visit, a sheep. When their problem still wouldn’t be solved, he would say, ‘Now there is one more thing for me to do,’ and he would do. That’s what the people we have arrested have said.”

Landay and his accomplices would then blackmail the women for regular payments. But his scheme was turned against him when a local strongman found out about it, barged into his house with two armed guards and took his phone and videos, Selab said.

“They demanded about $2,500 a month from him,” Selab said. “Rasool Landay paid about $700 at first, and then he couldn’t make the payments. So they started releasing the videos.”

In recent months, these years-old recordings have begun to appear on social media, further endangering the women he exploited.

Landay escaped to Turkey, where he lived for a couple of years.

When he returned to Faryab this summer, he took up arms with a pro-government local militia in Pashtun Kot.

“About three months ago, he came to me and said, ‘I want to be your fighter,'” said Abdul Azim Jamshidi, the militia commander. “He said he had repented and was no longer doing such business. I said, ‘OK, you can take arms, no problem.'”

Jamshidi said he and Landay were out on a mission last month when he received a call from the Afghan intelligence service informing him of Landay’s deeds and the government was looking for him. He said Landay might have overheard the conversation, since he slipped away that day and hasn’t been heard from since.

Others say Jamshidi knew exactly what Landay’s background was and had recruited him for that reason, then let him escape when the government called.

“If I had known, I would have killed him myself,” Jamshidi said of those accusations. “I wouldn’t have let him go.”

Landay’s current location is unknown. Fayeq, the governor, said he had reportedly been seen the past week in the northern city of Mazar-e-Sharif, his beard shaven and his look changed. Checkpoints were set up along the highway, but Fayeq said he believed Landay had made his way to Kabul, the Afghan capital.

Selab, the provincial council member, had another theory: After he was spotted in Mazar-e-Sharif, Landay traveled west to Nimroz province on the border with Iran.

“That is as far as the Afghan intelligence tracked thesignal on his phone,” Selab said. “Maybe he threw away the phone.”