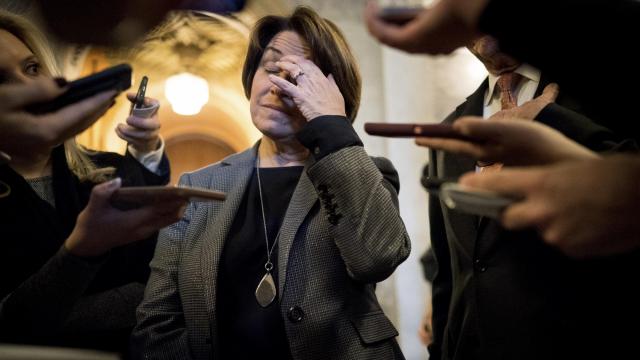 WASHINGTON — After months of stalled negotiations, lawmakers in the House and Senate reached a compromise on legislation that would overhaul the arcane and often burdensome procedures for handling sexual harassment and discrimination claims in Congress.

The compromise, reached more than a year after the #MeToo movement rattled Capitol Hill, would require members to personally reimburse misconduct settlements related to harassment or retaliation claims based on sex, ethnicity or race, rather than rely on a taxpayer-financed settlement fund.

Under the new standards, all settlements or awards involving a member of Congress would be publicly disclosed, even if the lawmaker has left office, and all settlements would be referred to the House or Senate ethics committees for review.

But members would not be financially liable for discrimination claims, as they would have in the harassment legislation that passed the House.

The bill would also streamline the cumbersome claims-reporting process established in the 1995 Congressional Accountability Act; it would eliminate the current process of mandatory mediation and the “cooling-off period,” where complainants have to wait a certain amount of time before submitting an official complaint, lawmakers and aides confirmed. The new standards would also protect interns, congressional fellows and employees in district offices.

Congress’ secretive Office of Compliance, which since 2008 has paid $199,000 through a controlled fund to settle four sexual harassment claims, would continue to exist, but it would be required to establish an electronic system for accepting, tracking and reporting filed claims.

“I just don’t think you should leave the mess for the next group to clean up. I think it is on us,” said Sen. Amy Klobuchar, D-Minn., referring to the next Congress. “It really is an antiquated system,” she added. “It feels like a process that was better designed to protect politicians rather than victims.”

Final written language for the legislation has yet to be released, but lawmakers said they expected a vote in both chambers before the end of next week.

The House, under a separate resolution that will be brought to a vote in that chamber, would also provide legal advisers to assist in filing claims, aides said. But Klobuchar and Sen. Roy Blunt, R-Mo., told reporters that compromise was necessary and that this first step should not be left for the next Congress to handle.

“The bill that we wound up with does meet the objectives that we were trying to meet,” Blunt said. “This is not going to be that complicated to implement.”

Both senators said they hoped to see unanimous support for the compromise bill.

The move toward tougher standards began this year after multiple lawmakers resigned amid accusations of sexual misconduct and taxpayer-funded settlements. Al Franken, D-Minn., was driven from the Senate, and Reps. Tim Murphy of Pennsylvania, Patrick Meehan of Pennsylvania, Trent Franks of Arizona and Blake Farenthold of Texas, all Republicans, and John Conyers Jr., D-Mich., were forced out of the House.

But after both chambers passed their versions of legislation, negotiations stalled as lawmakers clashed over a number of differences, including the exact definition of harassment and how to handle the investigation process.

The delay rankled victims’ rights groups and former complainants, particularly as the Senate wrestled with allegations of sexual misconduct against Brett Kavanaugh during his confirmation hearing for a seat on the Supreme Court.

Rep. Jackie Speier, D-Calif., and a lead negotiator on the original House bill, said that she, along with Rep. Bradley Byrne, R-Ala., planned to introduce legislation in the next House that would further toughen how Congress responded to discrimination.

The new compromise “is providing the victims with some power that they never had before,” Speier said in a brief interview. But she wants to go further.

Speier said they would next turn to strengthening workplace training — incoming lawmakers had to undergo training during new member orientation last month — and address sexual harassment in federal agencies.

“Generally, the bill isn’t perfect, but I think it’s a huge first step,” said Anna Kain, a former Capitol Hill aide who came forward this year with allegations of sexual harassment against the chief of staff for Rep. Elizabeth Esty, D-Conn. “I’m incredibly grateful that a deal was reached.”

“If I learned anything,” she added, “I think that sharing stories mattered.”