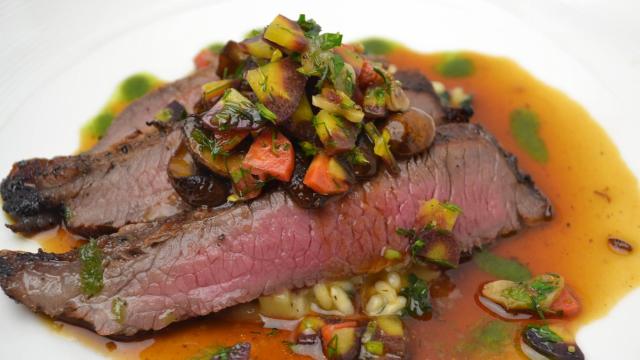 Raleigh, N.C. — Chef Spencer Carter, of Weathervane in Chapel Hill, used scouting and expertise to take it right to Chef Curt Shelvey, of Curt's Cucina in Southern Pines in the second semifinal of the Competition Dining Series: Triangle Tuesday night.

Carter, knowing he'd face off with Shelvey, took his wife and others to dine at Curt's five days before the battle to suss out the chefs strengths. He then planned his menu for Tuesday based on Italian specialties – a Curt's hallmark – and even served up a plate of gnocchi.

Together, the teams from Curt's and Weathervane rolled out six dishes incorporating the secret ingredients of the evening – Carolina Bison & Rosemary Pete’s Herbs Carrots.

As they waited for their entrees, guests treated themselves to the fresh bread provided by La Farm, cocktails made with TOPO vodka, including a carrot-themed martini, and beers from Lonerider Brewing Company.

I had the privilege of dining with a table of insiders – representatives of Pate Dawnson Foods, Libbey Foodservice and some chef Competition Dining alumni – who shared their insight during a meal in which every dish was delish.

Even before our plates arrived, the aroma of the meatball suffused the dining room, leaving diners actively sniffing in anticipation.

The meatball proved a perfection. It could have stood alone, many diners said, and was worthy of a menu spot at any fine restaurant.

I watched the chef beside me use bread to wipe his plate clean, savoring every bite.

After the meatball, this dish was a bit of a letdown. Diners were confused by the juxtaposition of cold ricotta on a warm pasta presentation.

The carrots, were prepared to a proper crispness in the sweet and sour agrodolce, "but it's hard to beat that meatball," one diner concluded.

A second pasta-ricotta pairing showed that Carter had tapped into Shelvey's thought process, preparing the dish that his opponent listed as his specialty, his favorite and his preference for a last meal on earth.

The shredded bison ragu was served in portions large enough to make a respectable entree, and many ate it all up.

Another large portion of bison was the key to this lovely dish. The rainbow carrots were used to excellent effect. Shelvey showcased color, crispness and flavor.

"This dish has all the dimensions," one of my dining partners said.

"Every bite in your mouth is a pleasure," another added.

Carrot cake was a no-brainer with these ingredients, but carrot caramel? "That is amazing," one diner said as he ran his finger around the plate for a taste.

Another added, "I hope they bring this again for Course 6."

The final dish was the crowd favorite with a fluffy cheesecake tinged with citrus and herbs to cut the sweetness.

"It's a great night. Every dish was good," my dining companions exclaimed as, sated, we waited for the scores.

Competition Dining host and founder Jimmy Crippen encouraged both chefs to recreate the experience in their own restaurants, ensuring them a sellout event.

When the scores were announced, Carter's strategy worked, to a point. He lost to Shelvey by just over a single point, with the dessert course the decider.

The dozens who had made the trip from Southern Pines erupted as that saw the totals and mobbed Shelvey with congratulations.

Once he saw Carter's menu, Shelvey, who regularly works from an Italian palate, said the men tasted each others dishes as they came together in the kitchen.

"We put out what we all felt was stellar food tonight," he said.

This week's two semifinals were shifted back a week due to snow. The final will pit Curt's Cucina against the team from Rex Healthcare led by Chef Ryan Conklin on March 9.