Community paramedics help sickest patients stay out of the hospital 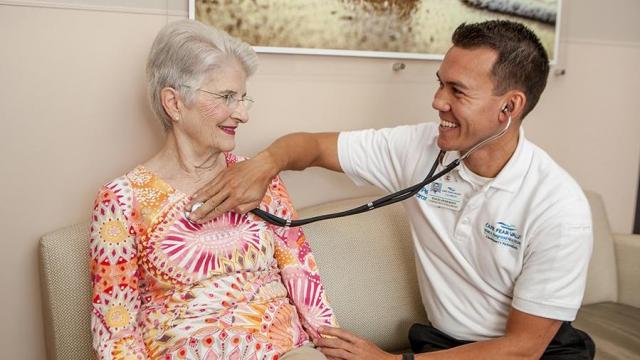 The elderly woman lived by herself in Fayetteville. Her complicated medical history included diabetes, congestive heart failure and being legally blind. She was routinely brought to the hospital emergency department and admitted for treatment of one of her many conditions.

Then the community paramedic assigned to her after she was discharged from Cape Fear Valley Medical Center did a little detective work.

The paramedic discovered that while the woman was doing her best alone at home, she couldn't see her medicine well enough to follow the directions. She often confused her medications and got the dosages wrong.

As a result, those drugs meant to treat her were ineffective, and she grew worse, which often meant a return trip to the hospital.

The solution to her problem was to get her medications prepackaged in the order and dosages prescribed, so she didn't have to read directions.

She was provided a talking blood pressure machine, a talking scale for weighing herself and a talking glucometer to check her blood sugar. She was also taught how to eat right with diabetes and heart failure, all compliments of the Community Paramedic Program of Cape Fear Valley Mobile Integrated Healthcare in Fayetteville.

"She did really well," said Suzanne King, program coordinator. "Today she lives in her own home, is independent and able to take her medication appropriately."

And she has managed to stay out of the hospital.

The mission of the Community Paramedic Program is to keep the sickest of the sick from being readmitted to the hospital. Before the program was created in 2015, one in four of these usually elderly patients with chronic conditions would end up back in the hospital in less than a month after being discharged.

"We're trying to prevent that," King said, "because they're often sicker and end up in worse shape than before."

It's working. The readmission rate for patients in the program is half that of patients with similar conditions who don’t use the program.

"The hospital is to stabilize patients and get them better and get them home," King said. "But they're not completely healed. We work to get them to back to healthy and well."

The community paramedics offer whatever a patient needs to thrive, whether it’s assistance with durable medical equipment, such as a shower chair, or help with medications, diet and exercise. The paramedic helps patients transition back to home for a month after discharge to make sure the recovery that started in the hospital continues.

Community paramedics -- like any paramedic -- can start IVs, give medications and treat emergency situations as needed. They carry with them all the same gear as an ambulance, and if they're close by when a call comes in about an emergency, they can respond.

But most of their time is scheduled appointments.

A grant from the Cape Fear Valley Foundation allows the program to buy the monitors and equipment -- such as rug securing devices -- many of their patients need to make their home safer. They recently partnered with the heart failure unit at Cape Fear Valley Medical Center to focus on those patients and their special needs.

Treating patients at their homes gives community paramedics an advantage over the physician in an office or in the hospital. They see patients in the patients' normal setting. They observe and ask questions, so solutions are found.

A recent example was a patient with chronic obstructive pulmonary disease who was being admitted to the hospital every two or three weeks.

After visiting with the patient, the community paramedic discovered that the patient went to play bingo in a parlor where smoking was allowed, which aggravated his condition and often led him back to the hospital.

Instead of the telling the patient to give up bingo, the paramedic found a smoke-free bingo parlor and the patient has avoided the hospital for six months.

This patient, like all those treated by community paramedics, "heals better and more quickly at home," King said.