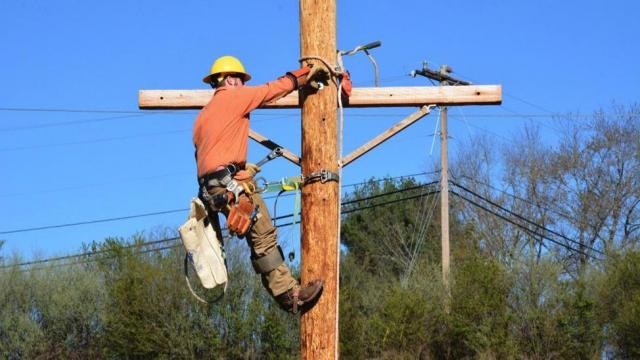 What about when the power goes out? When this happens, the blinking lights of our plug-in alarm clocks are a reminder of larger powers at play.

Our reliance on electrical power is rarely realized until we are without it. In large part, our electricity is made possible thanks to the line workers who work ceaselessly to ensure that our lights can turn on, our alarm clocks don’t fail and our groceries don’t spoil.

According to industry experts David Coffey and Jeff Holman, both instructors at Caldwell, the utility industry will need up to 1,500 line workers in North Carolina each year for the next five years, and another 500 each year in South Carolina, which explains why the company aligns their hiring with the program’s graduation dates.

These line worker programs have grown tremendously over the years. Since 2010, Forsyth Tech has trained nearly 400 line workers in their nine-week program, admitting no more than 24 students in each of its five yearly sessions to keep the student-to-teacher ratio at or below 4 to 1, primarily for safety reasons.

With the next three sessions already at capacity, and most graduates receiving at least one job offer, it is clear that people are catching onto the opportunities in this profession. Similarly, Caldwell’s program is at capacity through the beginning of 2019 and has been since February.

Derek Abendroth, a student in Forsyth Tech’s electrical line worker program, explained this upward trend, saying he would “recommend it to anyone.”

“I worked for a contractor for Duke Energy managing tree crews, and saw more opportunity and better benefits on the utilities side,” Abendroth said. “I tried getting a job with utilities but was unsuccessful, and I figured I’d go back to get an education on it. It’s been successful, and I already have several job offers.”

He added, “Employers come in and — even on graduation day — set up interviews for recruitment. Anyone who just wants a job, needs a job, without a doubt, you can get one through this program.”

Forsyth Tech was one of the first schools to start this type of program and is currently the only nationally certified line worker class in North Carolina.

Coffey, who is the coordinator of the electrical line worker program at Caldwell, added, “The way we build the program and the reason students are so sought after is because we take extensive time speaking with the boots on the ground — the supervisors and management — we find out what they’re looking for from graduates, and we build the program around that. We work really closely with the industry to find out what they need, and we tailor the program.” 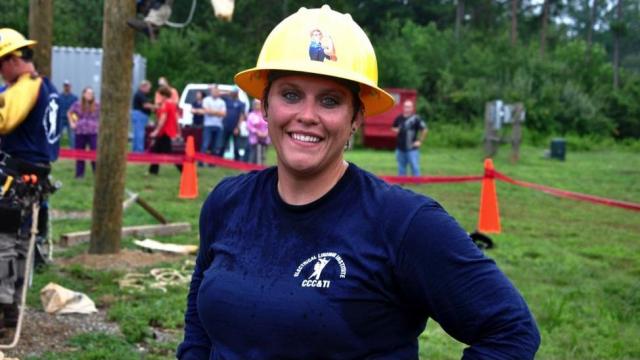 Something else that doesn’t hurt? The cost of the electrical line worker program at Forsyth Tech and Caldwell is about $700 and $450 respectively, as opposed to $12,000 at other (public) programs.

Students looking for a short, “shot-gun” approach can graduate Forsyth after nine weeks with industry certifications including OSHA-10, NCCER, flagger, first aid/CPR, auto defibrillation, and they can receive Pre-Apprentice credit by ApprenticeshipNC for their time in the program.

While you don’t need these credentials to become a line worker, most companies are now requiring those who don’t have them to complete similar programs.

Forsyth Tech’s instructors hit on everything in the industry through mostly hands-on training, from running trucks and climbing to doing underground work, with a constant focus on safety.

“Our students will get hired to do both sides of the job (overhead and underground), it all depends on the individual employer demand,” Webb said. “The more diverse you are, the more valuable you are.”

“We focus on quality,” said Holman, director of the electrical line worker program at Caldwell. “The industry recognizes that, and the stackable credentials. It’s not an easy program to get through; we do have high expectations. Not everyone who enters completes it.”

But for those who do complete the program, Holman confirmed a job is just around the corner.

“One hundred percent of our graduates are offered jobs before they graduate,” he said.

But both colleges’ programs are more than just an entry into the job market; they are a partnership with the greater utility community.

“We get a lot of support from contractors and Duke Energy — the more they support us, the more we benefit them in the long run,” Speight said.

Speight noted that Duke Energy and local contractors will call them up to see if the program needs any equipment over the course of the year, and the industry responds to the need.

“It’s a huge partnership with Duke Energy and [the] contractor community — it’s all a team effort,” Speight said. “It goes along with what we teach here; it’s safety and teamwork.”

Similarly, at Caldwell, a grant from Duke Energy has enabled the program to begin a much-needed expansion. Additionally, this close relationship with the energy giant has led to Caldwell’s involvement in the 4-H Electric Congress, where they have been invited by Duke Energy to join for past two years to talk to students about different avenues and opportunities through the program—the only one of its kind invited to participate.

“We’re all one big family,” Speight said. “We’re all doing the same thing. It’s all work we know is risky, has an effect on your family -- so it’s a lifestyle, not just a job.”