Comey Reaches Agreement With Republicans to Testify Behind Closed Doors 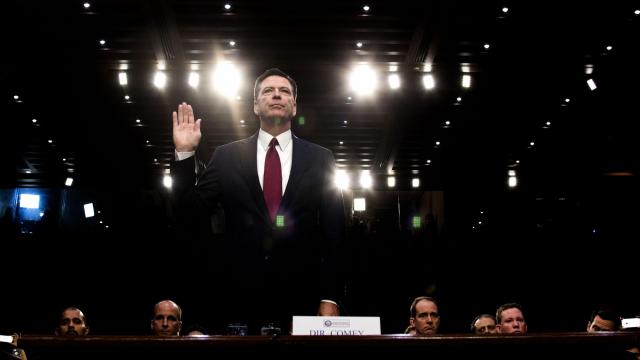 Former FBI Director James Comey has reached an agreement with Republican lawmakers to testify behind closed doors about investigations into Hillary Clinton’s email server and whether President Donald Trump’s campaign advisers colluded with the Russian government to steer the outcome of the 2016 presidential election.

Republican lawmakers agreed to release a transcript of his testimony in 24 hours and to allow Comey to speak about the meeting publicly, he said on Twitter.

“This is the closest I can get to public testimony,” Comey said.

Comey had been subpoenaed to testify privately Monday before the House Judiciary and House Oversight committees. He asked a federal judge to quash the subpoena and allow him to testify publicly.

The compromise about his testimony was reached a day before a federal court hearing about Comey’s request; a motion to quash the subpoena was withdrawn.

In a statement Sunday, Rep. Bob Goodlatte, R-Va., chairman of the Judiciary Committee, said: “There was no need to use baseless litigation in an attempt to run out the clock on this Congress, and I am glad that it was withdrawn. Mr. Comey will join us for a closed-door transcribed interview later this week. We will release the transcript of his interview to the public as soon as possible after the interview, in the name of our combined desire for transparency.”

With Democrats a month away from seizing the majority in the House and preparing to issue their own wave of subpoenas against Trump administration officials, House Republicans are trying to leverage the short time they have left in power to question Comey and make a case that the nation’s top law enforcement agencies — the FBI and Justice Department — have been tainted by partisan bias against the president.

Trump fired Comey in May 2017 as he was leading an investigation into whether Trump’s campaign colluded with the Russian government to direct the outcome of the 2016 presidential election. Trump explained the dismissal by citing Comey’s handling of the investigation into Hillary Clinton’s use of a private email server.

Trump’s former personal lawyer and fixer, Michael Cohen, who was the point person at the Trump Organization to negotiate a deal to build a grand skyscraper in Moscow, pleaded guilty Thursday to lying to Congress about the duration of the negotiations and the extent of the involvement of Trump — who is identified in court documents as “Individual 1.”

Trump has denied colluding with Russia and has called the investigation led by special counsel Robert Mueller a political “witch hunt.”