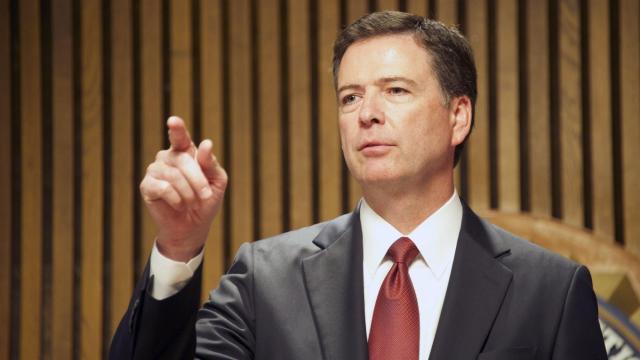 In his much-anticipated congressional testimony on Thursday, fired FBI Director James Comey will dispute President Donald Trump's blanket claim that he was told he was not under investigation multiple times, according to sources familiar with Comey's thinking.

Rather, one source said that Comey is expected to tell senators that he never assured Trump he was not under investigation, because such assurances would have been improper. Another source hinted that the President may have misunderstood the exact meaning of Comey's words, especially regarding the FBI's ongoing counterintelligence investigation.

In his letter to Comey firing him, Trump raised the Russia investigation and asserted that: "...I greatly appreciate you informing me, on three separate occasions, that I am not under investigation." The White House has not provided details of when those three conversations allegedly took place.

In addition, one source familiar with Comey's testimony says that Comey is not going to conclude whether the President obstructed justice regarding the agency's Russia investigation, according to a source with knowledge. Rather, this source says, Comey plans to present himself as a "fact witness" by simply describing the interactions with the President on multiple occasions that made him uneasy enough to memorialize their conversations. He "will leave the legal analysis for others," a source tells CNN.

While Comey is anxious to recount his version of his conversations with the President, he also appears likely to sidestep questions about how he felt about Trump's comments -- for instance, whether he felt pressured to drop the investigation or whether he thought they amounted to obstruction, another source said.

Comey believes that his own feelings about the President's comments are largely "irrelevant," the source said, and that his account of what happened is the central issue. What matters in considering possible obstruction of justice, this source added, is the President's intent, not how Comey felt about it.

The other key issues Comey will address are clear, a source adds -- the allegation that Trump asked Comey to pledge his loyalty to him shortly after he took office, and the President's request to ease up on the investigation into former national security adviser Michael Flynn in the FBI probe into possible collusion with Russia by Trump associates.

The former FBI director recorded at least one of those interactions in a written memo, the now-leaked contents of which paint a picture that some Democrats characterize as bordering on obstruction of justice.

"I hope you can let this go," Trump told Comey during one Oval Office meeting, according to the memo, which was described to CNN by a source.

Members of Congress have asked to see the memos, but it is unclear whether Comey intends to read from them -- or hand them over -- to Congress.

As CNN reported last week, while Comey was "disturbed" by his meetings with the President, he "thought he had the situation under control" because he felt the President did not quite grasp the inappropriateness of his actions. Comey believed, according to one source familiar with his thinking, that the President could be "trained" about how you do and do not interact with an FBI director. He considered it, this source added, "an ongoing policing project."

It is reasonable to conclude, this source added, that Comey did not think of any of the individual actions as constituting obstruction of justice. But, he also added, there is a question of whether the "aggregate pattern of behavior" that culminated in his firing could be seen very differently. In other words, while each episode could be seen as a "ham-handed misstep," the sum of the actions -- capped by the Comey firing -- could become something much more serious, especially after the President told NBC that he was thinking of the Russia investigation when he made the decision to dismiss Comey.

"That would change any rational person's point of view," said one source.

Even so, Comey does not plan to offer his own opinion because he does not believe it's his position to do so.

"There will no doubt be a tension between people trying to have him draw conclusions and being a fact witness," says this source familiar with Comey's thinking, indicating that it is up to the special counsel to draw legal conclusions after conducting a complete legal inquiry "into the White House side of things and not just a few interactions" with Comey.

"At the end of this, will some people jump up and down and say there's an obstructing offense?" asks another source. "Some might, but that's a political judgment, not a legal one."

As CNN first reported last week, Comey reached an understanding with Robert Mueller, the special counsel in the Russia investigation, which allowed him to testify about his tense conversations with the President but not the details of the Russia investigation itself. That cleared the way for his appearance on Thursday. Sources say the parameters set by the two men -- who are friends and former colleagues at the Justice Department -- were aimed at avoiding the possibility that Comey's testimony could taint any criminal case that Mueller might ultimately bring.

White House officials had considered trying to invoke the President's executive privilege authority to block the testimony, but they said on Monday that they would not do so.