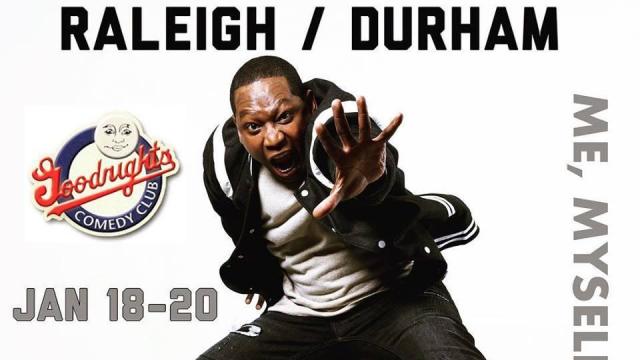 Torry, a veteran stand-up comedian and actor who headlines Goodnights Comedy Club in Raleigh this week, isn’t only thankful for his fans when they’re laughing at his jokes or applauding after a performance. The St. Louis native said during a Tuesday afternoon phone interview that he still gets goosebumps when he sees his name on a marquee or a ticket, which is a pleasant, refreshing outlook for someone who’s been in show business for 25 years like Torry has.

Although Torry is accomplished actor who stole a few scenes playing Lamont in American History X, he said he is a stand-up first, last and in between, and his love of the art form is purely unselfish, evidenced by Torry’s thoughts on treating every performance like it’s his last “because you never know who's coming to a live comedy show for the first time.”

We also discussed his love of Goodnights, the Los Angeles Rams’ season -- Torry is a Rams fan going back to the team’s days in St. Louis -- and more.

Tony Castleberry: We spoke in September 2016 before your first time doing shows at Goodnights. Did the club meet your expectations?

Guy Torry: Absolutely. It reminds me of an old school, throwback comedy club. It’s intimate, it’s comfortable, the energy’s incredible. Those are my types of rooms. That’s what makes comedy. That’s what good times are made of and I can understand why it’s named Goodnights because that’s exactly what the room feels like when you hop on that stage. The energy’s just sick.

TC: I’m guessing you were disappointed with the way it ended, but overall were you happy with the Rams’ season?

GT: It’s funny you bring that up because I ran into Todd Gurley (Monday) night at an event we were at along with Jerome Bettis as well, so one current Ram, one former Ram.

I expected the (playoff) run to go a little bit longer, but we didn't expect this this year. I mean, I didn't. I'm not gonna lie. (Coach) Sean McVay, I thought he would come in and it would maybe be a couple of years before he gained the locker room’s respect and get a playoff run maybe the next year and a half or two years. But this run was just incredible. I still think we didn't play our best game against Atlanta. I thought we could have done a lot better. Our special teams, which had been key for us all year, definitely -- literally -- dropped the ball. [interviewer, Torry laugh] I was at the game and it was exciting, but it was bittersweet.

TC: Awesome. I was working at a newspaper in eastern North Carolina when he was blowing up in high school. Everybody knew pretty early on that this kid was special and I seem to remember him always being civically minded, helping in the community even as a young guy.

GT: And in the locker room. Even last year when they were clearly out of the playoffs and the team was, like, going to mail the rest of the games in, as a second year player, he stood up and was like, “Look, let's still ball. We can't just mail it in because we're not in the playoffs. Let's finish strong.” That leadership in the locker room...man, if he stays healthy, there's no doubt in my mind that he's a future Hall of Famer.

TC: No question and by all accounts, a Hall of Fame dude off the field too.

GT: Exactly. I met him for the first time before a Thursday night game in San Francisco. I went up for the Rams game and met him and saw him again (Monday) night and had a great conversation with him. Real good dude.

TC: It’s good to see young people like that who have their heads on straight. Did you do stand-up before acting or did those things happen simultaneously?

GT: Stand-up is the girl that brought me to the dance. [interviewer laughs] It was always stand-up and it's always gonna be stand-up til the day I die.

TC: I’ve talked with other comics who, like yourself, have enjoyed some acting success but I swear, to a person, they always say that stand-up is closest to their heart. Why do you think that is?

GT: Because it's you. When you're a comedian and not a comic -- a comic says funny things; a comedian says things funny; a comedian bears their soul -- it's you. You take it more personal because nine times out of 10, you're the writer and you're the performer. How the crowd reacts, you're going to take that personal.

And the grind is a lot harder than acting. Yeah, you have to take acting classes and you’ve got the audition thing and all that stuff, but comedy is all you, man. It's 100 percent you. Yes, you can have a team of writers and things like that, but at the end of the day, you're telling your story and you're bearing your soul on stage. You're the one walking that tightrope without a net and that's a high that I don't think any drug can replace.

TC: Part of the attraction is that risk factor, don't you think?

GT: Absolutely. For the true ones, for the great ones, absolutely. That not knowing what's gonna happen. Of course you have your confidence and your swag. You have an idea of how it's gonna go, but you don't really know. You're praying it goes well. There's a little bit of nervousness there and then once you crack that first joke, it's smooth sailing from there.

TC: Do you enjoy stand-up less, more or the same now as you did when you started?

GT: I enjoy it more now because I know more. It's still a challenge, but it's a welcome challenge now. The traveling is a little bit much, but once you get on that stage, it's worth it.

I never get used to seeing my name on a marquee. I still get excited and still get humbled by anybody showing up to my shows. That takes something for someone to put your name on a marquee or put your name on a ticket and have somebody say, “I'm gonna take time out of my evening and be entertained by this guy or this girl.” I've been in this game 25 years, I average about 250 or 300 shows a year and every time I’m on stage, I try to treat it like it's my last.

I feel like every comedian is an ambassador for stand-up. I try to give my best on stage because you never know who's coming to a live comedy show for the first time. I want their experience to be a great one so they'll continue to support live comedy.

Women: Here are our stories of being harassed, assaulted and coerced in bedrooms

Media: This makes women look bad, you need to learn how to advocate for yourself!

Women: But sharing these stories is literally us advocating for ourse—