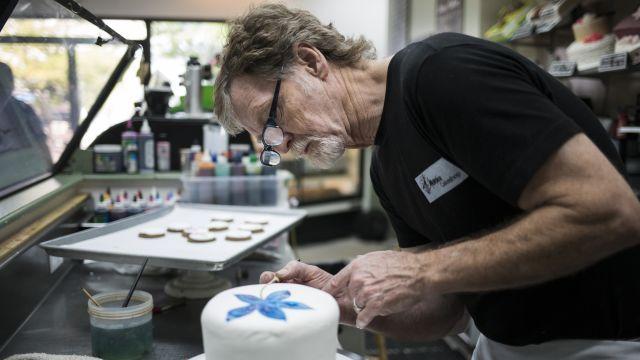 DENVER — The baker who won a Supreme Court case this year after refusing to make a cake for a same-sex wedding has sued the governor of Colorado, alleging the state discriminated against him when he declined to make a blue and pink cake for a transgender woman.

The lawsuit sets up yet another public battle involving Jack Phillips of Masterpiece Cakeshop over whether claims of religious freedoms can be used to refuse services to gay and transgender people. The Supreme Court did not definitively decide on that question in its ruling earlier this year, ensuring additional legal fights would ensue.

This time, the suit involves a customer, Autumn Scardina, who asked Phillips to make a cake with a blue exterior and pink interior that would mark her birthday and the seventh anniversary of her gender transition.

Phillips refused because the celebration ran contrary to his belief that gender is “given by God,” his lawyers said, and “not determined by perceptions or feelings.”

The suit, filed in U.S. District Court in Denver this week, alleges that Colorado officials are on a “crusade” against Phillips because he refuses to make cakes that violate his religious beliefs. In recent years, his lawyers say, he has been targeted by potential customers eager to test the limit of the law.

On the same day in June 2017 that the Supreme Court agreed to hear the first case, the lawsuit says Scardina, a lawyer, called Masterpiece Cakeshop and requested the gender transition cake. Then, days after the Supreme Court ruling, the state’s civil rights division issued a decision finding probable cause that state law requires Phillips to make the new cake.

“The woman on the phone did not object to my request for a birthday cake until I told her I was celebrating my transition,” Scardina wrote in a complaint to the state, explaining her interaction with one of Phillips’ employees. “I was stunned.”

Phillips’ small bakery, with its cafe tables and glass case of cookies, is tucked into a shopping center in the Denver suburb of Lakewood. It became part of a national discussion over religious rights after Phillips received a 2012 visit from David Mullins and Charlie Craig, gay men looking for a wedding cake for a reception in Colorado.

Phillips declined, and the couple filed a complaint with the Colorado Civil Rights Commission, saying that Phillips had violated a state law barring discrimination based on sexual orientation. Mullins and Craig won before the state commission and in the state courts.

The U.S. Supreme Court ruled in Phillips’ favor, but in doing so passed on the opportunity to rule on whether a business can refuse service to gay or transgender people by invoking First Amendment rights. Instead, in the majority opinion, Justice Anthony Kennedy argued that the Colorado Civil Rights Commission had been shown to be hostile to religion in that particular case.

“The outcome of cases like this in other circumstances must await further elaboration in the courts,” he wrote.

Disputes concerning businesses that sell wedding services, including florists, calligraphers, photographers and videographers, are being litigated around the nation. Earlier this month, Justice Ruth Bader Ginsburg predicted that the question of whether there can be religious exemptions to anti-discrimination laws might soon return to the Supreme Court.

In an interview with Colorado Public Radio this week, Gov. John Hickenlooper, a Democrat, said that he supports religious freedom but does not believe Americans should be able to use it to deny service. “I don’t think there should be bias involved of who you chose to serve and who you don’t,” he said.

But Phillips’ lawyers, who are affiliated with the conservative Christian organization Alliance Defending Freedom, allege that the state of Colorado “is ignoring the message of the U.S. Supreme Court.”

“Jack shouldn’t have to fear government hostility when he opens his shop for business each day,” they said in a statement. “We’re asking the court to put a stop to that.”